Judge Margaret Sweeney in the Federal Claims Court in Washington yesterday granted a motion that will force the U.S. Treasury to release all discovery document materials in its possession that pertain to the decision to take Fannie Mae and Freddie Mac into conservatorship.

The request, made by Fairholme Funds, represented by law firm Cooper & Kirk, is a big win for them in the battle to review federally sealed documents in its case against the United States government. Fairholme is one of several former investors in the government-sponsored enterprises who say their ownership stake was illegally taken from them by the federal government during conservatorship. They are fighting, in court, to get that stake returned.

Under the controverisal Third Amendment Sweep, the Treasury "may waive the Periodic Commitment Fee [to other shareholders] for up to one year at a time, in its sole discretion, based on adverse conditions in the United States mortgage market."

Rafferty Capital Markets analyst Richard Bove called it a “big win” for Fairholme in a note to clients.

“It has always been my belief that this mediation will result in a settlement giving shareholders their ownership rights back,” Bove said. “This case is now alive again in three courts any one of which could find in Fairholme’s and all other shareholder’s favor.”

“The next hoped for step is for one of these three courts to unseal the documents so that the public can see what has happened in the historical discussions between the White House, the Treasury Department, and the Federal Housing Finance Agency concerning Fannie Mae’s status,” he added.

If that happens, the public will finally know if the Treasury took over Fannie and Freddie, despite the secondary mortgage market firms being adequately capitalized. Investors have long argued this is so, and now a federal judge is siding with them.

Earlier filings help present the motivation behind the Sweeney decision:

“The evidence needed by plaintiffs to respond to defendant’s jurisdictional allegations is within the hands of defendant, and otherwise not publicly available,” Sweeney wrote earlier this year. “Thus, plaintiffs are entitled to discovery on this issue.”

“Therefore, in light of the parties’ dispute over jurisdictional facts and plaintiffs’ apparent lack of sufficient evidence to respond to defendant’s motion to dismiss, plaintiffs are entitled to conduct discovery in order to meet their burden of presenting the proof necessary to establish this court’s jurisdiction.”

Here is a screen shot of yesterday's decision, click to enlarge. 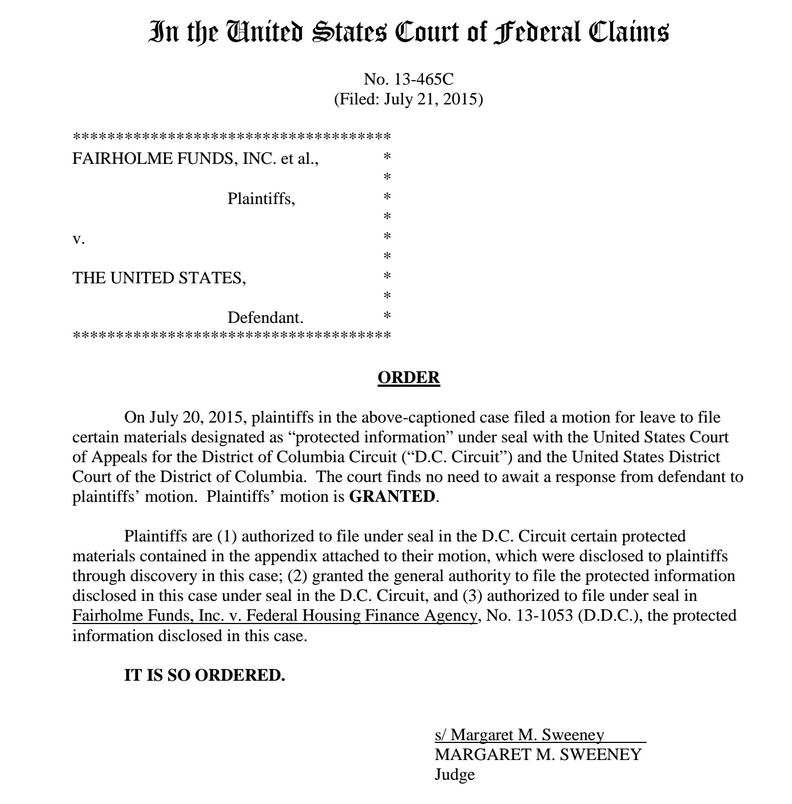