The share of seriously underwater homeowners increased 0.4 percentage points from fourth quarter 2014, and while it is only a slight increase, it marks the first quarterly increase since the second quarter of 2012, the latest RealtyTrac Home Equity and Underwater report for the first quarter said. However, this is still down more than four percentage points from a year ago. 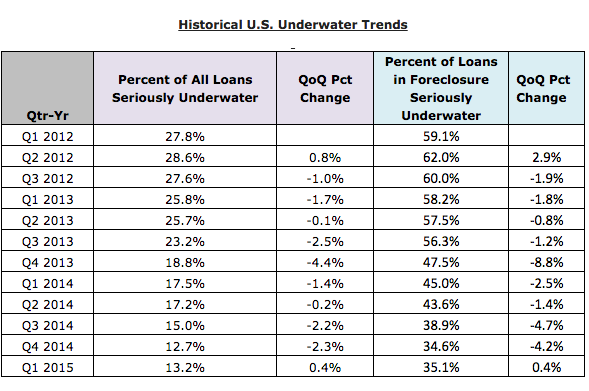 “At the end of 2014 we saw the lowest share of seriously underwater properties since we began tracking such data, but in the first quarter that share bumped up slightly as home price appreciation continued to slow down in many markets,” said Daren Blomquist, vice president at RealtyTrac.

“In addition, the data indicates more owners who have regained equity listed and sold their homes in the first quarter, cashing out on some of the home equity on the table in the U.S. housing market. The biggest change in the equity landscape nationwide was in the category of homeowners with between 20% and 50% equity, which saw a net decrease of nearly half a million between the end of the fourth quarter and the end of the first quarter,” he said.

“Meanwhile, most of the seriously underwater homeowners are still stuck in their homes as short sales and other foreclosure alternatives lose momentum, tilting the national home equity scales back slightly toward a higher share of negative equity,” Blomquist added.