Ben Bernanke has gone from being the most powerful conjurer at that Hogwarts known as the Federal Reserve to being a lowly blogger for the Brookings Institution.

Call it "blogatative easing." (That's crowdsourced from our newsroom.) At least he can't hurt himself or others blogging.

On January 31, 2014, I left the chairmanship of the Fed in the capable hands of Janet Yellen. Now that I’m a civilian again, I can once more comment on economic and financial issues without my words being put under the microscope by Fed watchers. I look forward to doing that — periodically, when the spirit moves me — in this blog.

But the Internet is serious business. They don’t just let anyone write for the Internet, you know. And it’s a grind. All I ever asked is for an honest week’s pay for an honest day’s work, but even with the hot tub models, it can wear at you.

The consensus among the threes of people I polled is that Bernanke may be done blogging by the time Janet Yellen raises interest rates. Over/under is set at six months.

Anyhow, with his second blog post Bernanke – oh, how shall I put this? – “returns to the scene of the crime” in discussing how really, it’s not the Fed that sets interest rates anyhow.

The whole thing is wonky and I encourage you to read it all. But here is, as we say in the biz, the “nut graph(s).”

If you asked the person in the street, “Why are interest rates so low?”, he or she would likely answer that the Fed is keeping them low. That’s true only in a very narrow sense. The Fed does, of course, set the benchmark nominal short-term interest rate. The Fed’s policies are also the primary determinant of inflation and inflation expectations over the longer term, and inflation trends affect interest rates, as the figure above shows. But what matters most for the economy is the real, or inflation-adjusted, interest rate (the market, or nominal, interest rate minus the inflation rate). The real interest rate is most relevant for capital investment decisions, for example. The Fed’s ability to affect real rates of return, especially longer-term real rates, is transitory and limited. Except in the short run, real interest rates are determined by a wide range of economic factors, including prospects for economic growth—not by the Fed.

A similarly confused criticism often heard is that the Fed is somehow distorting financial markets and investment decisions by keeping interest rates “artificially low.” Contrary to what sometimes seems to be alleged, the Fed cannot somehow withdraw and leave interest rates to be determined by “the markets.” The Fed’s actions determine the money supply and thus short-term interest rates; it has no choice but to set the short-term interest rate somewhere. So where should that be? The best strategy for the Fed I can think of is to set rates at a level consistent with the healthy operation of the economy over the medium term, that is, at the (today, low) equilibrium rate. There is absolutely nothing artificial about that! Of course, it’s legitimate to argue about where the equilibrium rate actually is at a given time, a debate that Fed policymakers engage in at their every meeting. But that doesn’t seem to be the source of the criticism.

The state of the economy, not the Fed, is the ultimate determinant of the sustainable level of real returns. This helps explain why real interest rates are low throughout the industrialized world, not just in the United States.

The whole post is tedious, wordy, and defensive. It points the finger at everything and everyone else. Bubbles? What bubbles? This is not false prosperity. These policies aren’t causing the income inequality and stagnant wages everyone is on about. It’s not our fault. Turn those machines back on!

ZeroHedge’s take on this is priceless.

He is absolutely right. What he just fails to notice is that the entire world is gripped in ZIRP, and increasingly NIRP, is that the current bubble implosion aftermath, now 7 years after the Lehman collapse, is merely the 3rd consecutive bubble burst in the past 15 years. In other words, the Fed may spout whatever mumbo jumbo it wants about why its response to the crisis was required, what it has zero defense against is why its only policy under the Greenspan "Great Moderation" paradigm has been to inflate bubbles, and replace a post-bubble vacuum with another bubble, ultimately leading to a complete and global economic halt, and a world in which central banks now have to monetize all net developed world issuance!

In essence there is no Weimar state any more – the entire world has become Weimar, and the only reason why no currency is hyperinflating in isolation is because absolutely everyone is doing the same cardinal monetary sin at the same time.

The whole thing is there and you can’t put your finger on any single assertion Bernanke makes but it’s like hearing someone say, “This is why you made me hit you.”

If that seems like it’s a harsh simile, it’s the kindest one I can conjure.

It would be a cheap shot to throw out some of Bernanke’s godawful forecasting as relates to housing, but then again cheap is one of the few things some of us can afford in this miracle recovery.

“Well, I guess I don’t buy your premise. It’s a pretty unlikely possibility. We’ve never had a decline in house prices on a nationwide basis. So, what I think is more likely is that house prices will slow, maybe stabilize, might slow consumption spending a bit. I don’t think it’s going to drive the economy too far from its full employment path, though.” – Bernanke, July 2005

“The credit risks associated with an affordable-housing portfolio need not be any greater than mortgage portfolios generally.” – Bernanke, March 2007

Probably cheaper still to ask him in comments to defend statements like this:

"It is not the responsibility of the Fed to protect investors from the consequences of their financial decisions" – Bernanke, March 2007

But really, these kinds of goofs pale in comparison to the systematic policy he and his fellow fabulists wrought in the years that followed.

There’s no adequate justice to be had for this, but now that Bernanke is on the Internet, maybe there is Internet justice.

Someone activate the 4Chan batsignal. 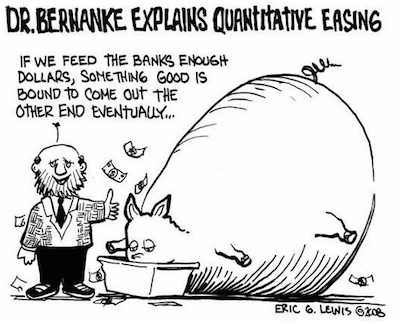