With a projection that home prices and interest rates will increase and mortgage affordability will decrease, Detroit is predicted to be the most affordable and San Francisco the least affordable housing market this year, according to the first-ever realtor.com Mortgage Affordability Report.

The report pulls data from the 25 largest housing markets in the United States and provides a glimpse into affordability on a national level as the spring housing season gets underway.

“Over the last 10 years, we have seen marketplace gyrations ranging from bubble to burst to recovery to stabilization, and we are now seeing a market of extremes on the affordability front,” said Jonathan Smoke, chief economist for realtor.com. “Buyers – especially first-time home buyers – might feel more motivated as the overall market continues to improve, and this report provides potential buyers with local insight that is both informative and instructive.” 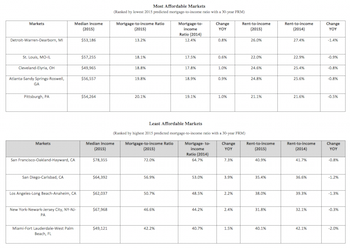 Of the most affordable markets, Detroit is No. 1 on the list with 30-year fixed-rate mortgage purchases forecasted to annually require 13.2% of median income, which is way below the mortgage qualification threshold of 28%. The predicted rent-to-income ratio is higher at 26%. All five of the most affordable markets are below the 28% mortgage-to-income ratio threshold.

The report found that in the San Francisco and San Diego markets, the expected mortgage-to-income ratio by year-end is more than double the 28% of income threshold with San Francisco requiring 72% of median income. Additionally, renters in the five least affordable markets spent a high percentage of their income on rent in 2014 and will again in 2015, although rent is not expected to grow as fast as incomes in each market. San Francisco has the highest forecasted rent-to-income ratio with 40.9%.

Nationally, by the end of 2015, the report found that the median household income of $55,533 will spend 27.6% of income annually on a median priced home purchased with a 30-year FRM. Rent is predicted to require 29.5% of income.

“Affordability is greatly impacted by mortgage rate, so waiting a year to buy as affordability declines may force home buyers to consider alternative options such as hybrid-adjustable mortgages that have lower rates,” Smoke said. “Many first-time buyers are also challenged by having the funds for a down payment. While there are low down payment mortgage options, a disadvantage of a low down payment is higher monthly payments. The cost of owning varies across the country, but there are major cities where owning an averaged priced home is within reach of the median income household.”