A new report from Clear Capital says that while four of the California Bay Area's nine counties are near or exceeding their pre-meltdown valuation highs, local market forces will keep bubble-like behavior at bay for the rest of the state and throughout the nation.

“Healthy buyer demand and strong job markets in the California Bay Area are factors helping to push home prices up. Our most recent data through February 2015 shows the Marin, San Francisco, San Mateo, and Santa Clara counties approaching or exceeding their peak levels over the last 18 months,” they write. “San Francisco and San Mateo counties have exceeded peak levels on an all property tier level (low, mid, and top tiers). San Francisco is now 16% above former peak levels, while San Mateo County is 8% above.”

The report says that the West, still 22% below peak pre-recessionary levels, and the State of California, 27% below peak as a whole, douse concern of a bubble nationwide.

"The fact that we are now seeing quarterly declines in arguably one of the hottest markets in the country should be a stark reminder that the state of the overall housing market continues to be tenuous," says Alex Villacorta, vice president of research and analytics at Clear Capital. "Buyers may have finally reached their limits in response to red-hot price increases, and as such are pulling out of the demand pool. If waning buyer demand continues through the first part of the year, we could see inventory increase, and in response falling home prices well into the second quarter." 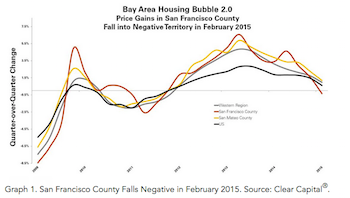 "Extending beyond the Bay Area, all of the bottom performing 15 markets are either already showing negative quarterly returns or are within .5% of doing so," says Villacorta. "While not all markets are in bubble territory or on the precipice of declines, the market overall is at an inflection point. The aggressive run of price growth that started in 2013 has clearly subsided, and like all inflection points, market participants must be vigilant of local market conditions to ensure their interests aren't on the downside of any price swings back into negative territory. Given the lackluster start to key housing metrics this year, we continue to stand by our start of year predictions of 1-3% growth for the full year."

The Bay Area housing market is showing signs of cooling price gains, as opportunity for affordable housing is scarce. Data through February 2015 shows early signs of cooling in San Francisco and San Mateo counties. San Francisco and San Mateo counties' quarterly growth rates peaked in the second quarter of 2013 at 6.6% and 5.9% respectively, but have decelerated in each quarter since.