A home in San Antonio, Texas was robbed.

No, things weren’t taken from the home. The whole house was robbed.

A couple in San Antonio had just built their “tiny house” to commit themselves to a green lifestyle, spending two-and-a-half years and $35,000. (Here's one take on the tiny house fad.)

The home theft victim, Casey Friday, told the Fox News affiliate, “It was depressing, devastating, made me angry and shocked all at the same time.”

The Fridays had just finished building it and moving it to a plot they’d bought, but thieves stole it in the night on Jan. 2 because it is a mobile structure.

The tiny house was on a trailer that the thief simply attached to a truck and drove off with. 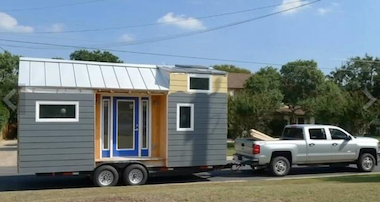 The Fridays told local media that even though the house was found on the south side of town days later, they don't know if they want to live in it anymore after signing a lease for an apartment.

The whole story sounds fishy to many of the article's original readers, especially, they say, when you look at what he built for $35,000.

The best part of the story are the comments. Here are a few choice ones.

If you live in a trailer people are portrayed as backward, ignorant, racist, trashy. If you live in a Little House you are an EcoFriendly Forward Paying, sensitive steward of our precious planet.

Buy a small fiberglass houseboat. Put it on a flatbed trailer. Now you have a boat and a small Tiny House all in one. If it floods you float.

Um, it's a trailer. You could get a better one cheaper at any RV dealer.

Yes but then they couldn’t feel superior for being Green.