Americans are living longer and America doesn’t have the housing for them, according to a new report by the Harvard Joint Center for Housing Studies and AARP Foundation.

The study, Housing America’s Older Adults — Meeting the Needs of An Aging Population, says that the number of adults aged 50 and over is expected to grow to 132 million by 2030, an increase of more than 70% since 2000. (See the interactive map on America's aging population here.)

Housing that meets the need of the older – affordable, physically accessible, well-located, and coordinated with supports and services – is in too short supply.

“Housing is critical to quality of life for people of all ages, but especially for older adults,” the report says. “High housing costs currently force a third of adults 50 and over—including 37% of those 80 and over—to pay more than 30% of their income for homes that may or may not fit their needs, forcing them to cut back on food, health care, and, for those 50-64, retirement savings.”

According to the study, much of the nation’s housing inventory also lacks basic accessibility features, such as no-step entries, extra-wide doorways, and lever-style door and faucet handles, which prevents older people with disabilities from living safely and comfortably in their homes.

Additionally, with a majority of older adults aging in car-dependent suburban and rural locations, transportation and pedestrian infrastructure is generally not well-suited to those who aren’t able to drive, which can isolate them from friends and family. 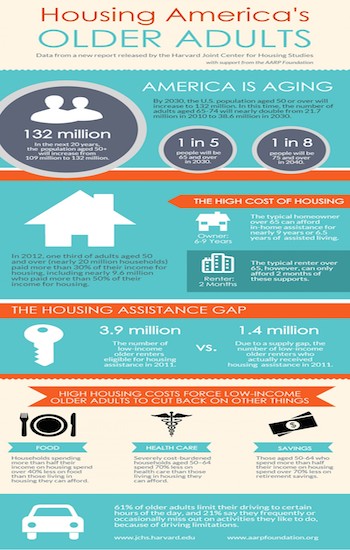 Finally, disconnects between housing programs and the health care system put many older adults with disabilities or long-term care needs at risk of premature institutionalization.

“Recognizing the implications of this profound demographic shift and taking immediate steps to address these issues is vital to our national standard of living,” says Chris Herbert, acting managing director of the Harvard Joint Center for Housing Studies. “While it is ultimately up to individuals and their families to plan for future housing needs, it is also incumbent upon policy makers at all levels of government to see that affordable, appropriate housing, as well as supports for long-term aging in the community, are available for older adults across the income spectrum.”

With lower incomes, wealth, homeownership rates, and more debt than generations before them, Baby Boomer over 50 may be unable to cover the costs of appropriate housing or long-term care in their retirement years.

Indeed, while a majority of people over 45 would like to stay in their current residences as long as possible, estimates indicate that 70% of those who reach the age of 65 will eventually need some form of long-term care. In this regard, older homeowners are in a better position than older renters when they retire. The typical homeowner age 65 and over has enough wealth to cover the costs of in-home assistance for nearly nine years or assisted living for 6 and half years. The typical renter, however, can only afford two months of these supports.

"As Americans age, the need for safe and affordable housing options becomes even more critical,” says Lisa Marsh Ryerson, President of the AARP Foundation. “High housing costs, aging homes, and costly repairs can greatly impact those with limited incomes. The goal in our support of this report is to address the most critical needs of these households and it is AARP Foundation’s aim to provide the tools and resources to help them meet these needs now and in the future.”