Both the quarter-over-quarter and year-over-year home price increases are lower than they were twelve months ago, but wages are not keeping up, according to data from Trulia (TRLA) for July 2014.

The month-over-month increase in asking home prices of 0.8% was in line with the average monthly gain over the past year, settling back down after a 1.2% month-over-month in June. The quarter-over-quarter increase of 2.5% remains below the level of last spring’s price spurt, when the quarter-over-quarter increase was 3% or higher in March through June 2013.

Although prices aren’t rising as fast as they did in spring 2013, price increases continue to be widespread, with 97 of 100 metros posting year-over-year price gains, and 94 posting quarter-over-quarter gains.

These price increases for the 100 metros Trulia tracks in the report compare with home price gains nationwide, as reported Tuesday by CoreLogic (CLGX), which shows that home prices nationwide, including distressed sales, increased 7.5% in June 2014 compared to June 2013.

Bank of America Merrill Lynch analysts blame the slowdown on a snapback from heated price gains in 2013.

But Jed Kolko, chief economist at Trulia points out that despite this national slowdown in price gains, price increases continue to be widespread. 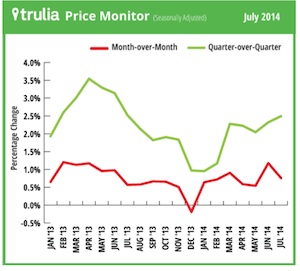 The home-price recovery continues to change shape. For the first time in more than two years, none of the 100 largest U.S. metros had a year-over-year price increase above 15%. Furthermore, the biggest price gains are mostly in the Midwest and South, with only one western market – Riverside-San Bernardino – on the top 10 list for asking-price increases.

The stagnation of wages and household income, though, shows that as Trulia assets, incomes aren’t keeping pace with even slowing price gains.

Senior loan manager at AMC Lending, Logan Mohtashami, a premier blogger and writer on the subject, created the following graphic to illustrate the point and to show why mortgage origination has stalled out. 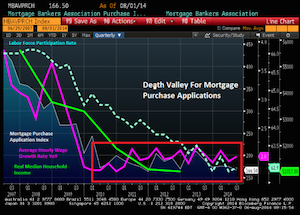 The Trulia Price Monitor and the Trulia Rent Monitor are the earliest leading indicators of how asking prices and rents are trending nationally and locally.

They adjust for the changing mix of listed homes and therefore show what’s really happening to asking prices and rents.

Because asking prices lead sales prices by approximately two or more months, the Monitors reveal trends before other price indexes do. 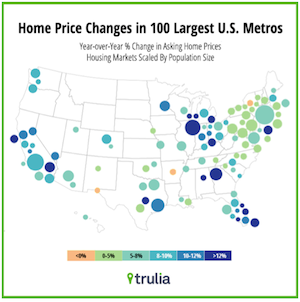 "Why are home prices rising faster in these markets than in places like Little Rock, Baltimore, and Rochester, where prices are rising minimally or even falling year-over-year?," Kolko asks. "In part because the housing market is still recovering from the bust, and the local markets where prices had fallen most are now seeing larger price gains – that’s the 'rebound effect,' which was fueled by investors and other home buyers scooping up relative bargains."

But, Kolko says, the rebound effect can’t last forever: once those bargains are gone, there’s no more room to rebound.

"We’re already seeing price gains slow dramatically or even reverse in some of the boom-bust-and-rebound markets," Kolko says.

The correlation between price changes and employment changes in July 2014 is 0.53 – a strong and statistically significant relationship. (Remember that correlations range from 1 to ?1, where zero means there is no linear relationship.) Detroit is the outlier, with the biggest job loss (~1.0% year-over-year) of any large metro but the fifth-highest home-price gain – it also has the lowest home prices and highest vacancy rate of any large metro, so it’s a special case in many ways.

But excluding Detroit, the correlation between price changes and job growth is 0.59.