Home price growth continued to slow in May as housing and the economy continue weakening trends, according to data through May 2014 in the S&P/Case-Shiller Home Price Indices, which show housing prices posted declines of 0.3% from April.

All cities with the exception of Charlotte and Tampa saw their annual rates decelerate.

“Home prices rose at their slowest pace since February of last year,” said David Blitzer, chairman of the Index Committee. “The 10- and 20-City Composites posted just over 9%, well below expectations. Month-to-month, all cities are posting gains before seasonal adjustment; after seasonal adjustment 14 of 20 were lower.” 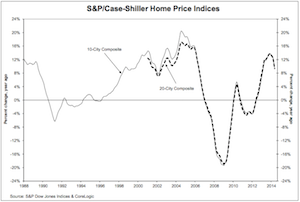 Seasonally adjusted home prices fell 0.3% in May from the prior month, the first drop since January 2012, after climbing 0.1% in April.

“Home price gains have been tapping the brakes, slowing again in May,” said Quicken Loans Vice President Bill Banfield. “While homeowners and prospective sellers may find this disappointing, when paired with interest rates that are at 12-month lows, these home prices bring greater affordability to those looking to buy.”

Property prices fell in 14 of 20 U.S. metropolitan areas in May from a month earlier after adjusting for seasonal variations.

“Nationally, today’s Case-Shiller data is consistent with the slow glide-path down towards a more normal housing market we’ve been experiencing for the past few months. But the national numbers are masking a lot of variation from city-to-city: Cleveland, for example, is performing a lot differently than the Bay Area,” said Zillow Chief Economist Stan Humphries. “And even within local markets, the entire housing stock is not performing the same. Almost across the board, lower-priced homes have been appreciating more quickly than the most expensive homes, a welcome reversal from prior years. This is driven by higher affordability at the bottom tier, which boosts demand; and much higher negative equity rates at the lower end of the market, which keeps supply tight. These conditions are typical of a housing market recovery in which every layer of the onion we peel off reveals something different.”

Charlotte posted its highest monthly increase of 1.4% in over a year. Tampa gained 1.8%, followed by San Francisco at 1.6% and Chicago at 1.5%. Phoenix and San Diego were the only cities to gain less than one percent with increases of 0.4% and 0.5%, respectively.

Housing has been turning in mixed economic numbers in the last few months. Prices and sales of existing homes have shown improvement while construction and sales of new homes continue to lag.

“Forward advance is rarely a straight line, more often upward movement with intermittent pauses to catch its breath. Housing is in the sixth inning and has a long way to go yet before it peaks," David Lichtenstein ,chairman and CEO of The Lightstone Group, said.

While all cities continue to post year-over-year increases, gains weakened in May. Charlotte was the only MSA to see its annual rate improve; it posted 4.7% year-over-year in May versus 4.5% in April. Tampa held steady with a gain of 10.2%. Despite seeing their rates decrease by two to three percentage points, Las Vegas remained the top performing city with a return of 16.9%, followed by San Francisco at 15.4%.