The housing market that’s a sort of canary in the coalmine for bubbles is getting all bubbly.

Writing at ZeroHedge, our favorite pseudonym’ed blogger Tyler Duren caught something in this morning’s Case-Shiller data.

While the rest of the mainstream financial media is acting like the May existing home sales numbers somehow erase all the disappointing housing reports since January, Tyler saw a great big red flag.

(And if he’s right – he usually is – don’t be surprised to see a bunch of high-end homes going on sale in the Golden Gate city.)

Courtesy of its location, not only does it reflect the general Fed-driven liquidity bubble which is the tide rising all housing boats across the US, but due to its proximity to both Silicon Valley and China, it also benefits from two other liquidity bubbles: that of tech, and of course, the Chinese $25 trillion financial debt monster…

It is no surprise that during ever single previous bubble peak, San Francisco home prices managed to post a 20% annual increase, starting with the dot com bubble in the year 2000, and certainly the first (not to be confused with the current) housing bubble peaking around 2005.

What we found [in San Francisco] is a red flag for everyone waiting to time the bursting of the latest housing bubble. Because after an unlucky 13 months of posting consecutive 20% Y/Y price gains, the San Francisco bubble appears to have finally burst, posting "just" an 18.2% price increase, the lowest since January of 2013. 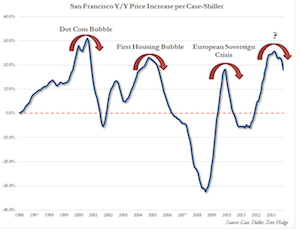