The Consumer Financial Protection Bureau is back in the crucible on Capitol Hill Tuesday, this time in two hearing on the House side, both of which are guaranteed to generate white hot debate from all sides.

On Wednesday CFPB director Richard Cordray ventures into hostile ground when he presents his semi-annual report to the House Financial Services Committee.

Cordray faced a tough time before the Democrat-controlled Senate Banking Committee last week, and the Republican-led House committee has been one of the CFPB’s most vocal critics.

As last week, Cordray will report to the House committee on the cumulative accomplishments of the CFPB to date, as well as efforts its made specifically in the housing industry.

“Through our enforcement actions to date, we have aided in efforts to refund more than $3.8 billion to consumers who fell victim to various violations of consumer financial protection laws.  In the fall of 2013, for the first time, we took action, in conjunction with multiple state Attorneys General, against an online loan servicer for illegally collecting money that consumers did not owe,” Cordray plans to say, according to his prepared remarks.  “We took action against a payday lender for overcharging service members in violation of the Military Lending Act, and robo-signing court documents.  We took action against an auto lender for discriminatory loan pricing.  And we partnered with 49 states in bringing an action against the nation’s largest nonbank mortgage loan servicer for misconduct at every stage of the mortgage servicing process.” 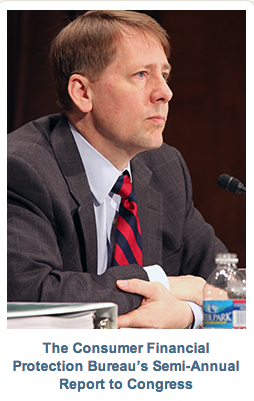 Cordray also plans to preemptively address the controversy surrounding allegations of discrimination under his watch.

“They are the reason I took decisive and comprehensive action to remedy the problems related to our performance ratings system.   After our analysis showed ratings disparities across a wide range of employee characteristics, we negotiated with our union to discard the system, announced that we would adjust past compensation, and agreed to a joint working group with our union to design a new system.  By self-correcting and self-remediating disparities in our performance ratings, I am also holding us to the same standard we expect from the industries we oversee,” Cordray plans to say.

“I have also elevated our Office of Minority and Women Inclusion (OMWI) to work directly out of my office and tasked the head of OMWI, Stuart Ishimaru, with conducting Bureau-wide listening sessions to hear directly from our employees about their experience with equality and fairness.  We have also instituted additional mandatory Equal Employment Opportunity training for all of our managers.  We will continue to work on creating an organization that consciously embraces diversity,” his remarks state.

Cordray will likely face a rougher time than did Julian Castro, the White House's nominee for Secretary of Housing & Urban Development, who sailed through his initial Senate Banking Committee confirmation hearing Tuesday.

In a separate hearing but definitely related on Wednesday, a subpoenaed CFPB employee will testify before Congress this week about a “culture of intimidation and retaliation” at the agency and raise allegations of mistreatment in the workplace — including that he was referred to as an “F-ing foreigner” by someone in management, according to information from the committee.

Ali Naraghi, an examiner with the division of supervision, fair lending and enforcement for the CFPB’s Southeast region, is one of two witnesses set to appear before the House Financial Services Oversight Subcommittee. It’s part of the panel’s ongoing investigation into allegations of discrimination and retaliation within the agency.

Naraghi, of Persian heritage, does not specify who in management allegedly called him an “F-ing foreigner” in his opening remarks.

“Like many others, I feel fortunate to have immigrated to the United States, and do not deserve to be referred to in derogatory terms by Bureau management,” Naraghi says in prepared testimony. Naraghi claims that several people at the agency made his life “a living hell” through repeated retaliation and hostile behavior.

Naraghi and Kevin Williams, a former CFPB employee who was a quality monitor at the bureau’s Office of Consumer Response, were issued subpoenas by the Oversight Subcommittee last week and are set to testify in a hearing Wednesday afternoon.

It is the second time this year that the committee exercised its subpoena powers to compel the testimonies of people connected to the CFPB, and Wednesday will mark the third hearing where witnesses discuss alleged mismanagement across the agency.

The CFPB has come under congressional scrutiny this year after it was first reported in March that white employees received higher ratings than minorities on a rating scale that the agency uses to determine employee benefits, including raises and bonuses. An internal review found disparities in the ways employees were evaluated in recent years based on factors like race ethnicity, age and pay, and the bureau announced last month that it would compensate workers who may have received unfair performance ratings as a part of the CFPB’s “corrective actions.”

Republicans in the House have been critical of the agency since it opened for business in 2011, arguing it represents a government overreach

Democrats have expressed concerns about the charges as well but have urged panel Republicans to broaden the inquiry to all financial regulators rather than focus only on the bureau.

A bureau spokesperson declined to comment directly on Naraghi’s testimony. They pointed to a March report from CFPB’s inspector general that made recommendations on how the bureau can improve its supervisory activities. CFPB officials told the IG they have taken steps to address the audit’s findings, according to the report.