Everyone loves it when home prices go up, right? Higher asking prices mean that homeowners will get more out of their existing homes, which makes them more likely to sell and upgrade to a larger home. Larger home means larger mortgages. And that’s a win-win for everyone in this business, right?

However, here’s the good news. The asking prices for homes are still increasing, but prices are beginning to stabilize. According to Trulia’s Price Monitor report for May, none of the 100 largest metros had a year-over-year price gain of more than 20%. That’s the first time that’s happened since July 2012.

According to Trulia’s report, the home price explosion peaked in September and October 2013 when 12 metro areas saw price increases of over 20%. The chart below shows the extreme changes in asking prices. 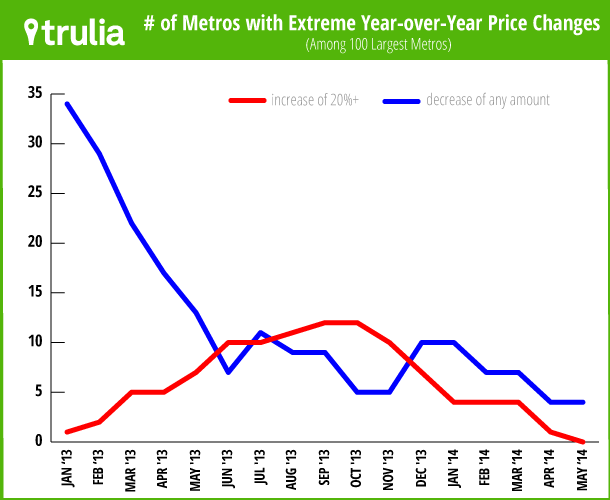 “That means that the national price slowdown has NOT pushed more markets into price declines,” Kolko said. “Rather, the price slowdown has meant a deceleration in the booming markets where prices had been rising unsustainably fast.”

The four markets where asking prices are on the decline are El Paso, Texas; Hartford, Connecticut; Albany, New York; and Little Rock, Arkansas.

On the other side, the steepest increase was 18.8%, in Riverside-San Bernardino, California. Bakersfield, California was up 16% in May, Atlanta was up 15.6% and Detroit was up 15.2%.

On the whole, asking prices rose at their slowest rate in 13 months, rising 8% year-over-year. “Although this year-over-year increase is slower than in previous months, an 8% increase is still far above the long-term historical norm for home-price appreciation,” Kolko said.

The chart below shows the national average for home price increases. 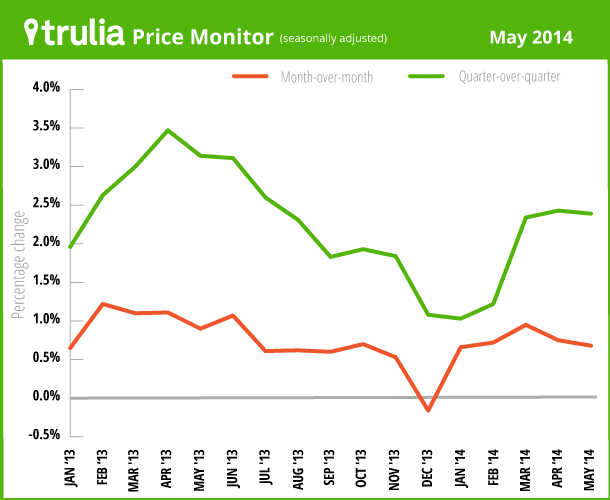 So home prices are still on the rise, but the rise is a little more controlled and reserved. And with the total number of properties with equity rising by 300,000 in the first quarter to more than 43 million total, more people may finally start to put their homes on the market.

Plus with lack of inventory dampening the outlook for Spring buying season, more houses on the market should be a good thing for everyone.

But not everyone shares in Kolko's positive view of the future. Christopher Whalen opines that home prices aren't actually on the rise. He says home prices may actually start falling soon.

Who's right? Only time will tell.