For three consecutive years after the Great Recession, the U.S. labor force dwindled, making it the only multiyear decline in postwar history. While temporary repetitive factors drove a portion of the recent workforce contraction, more long-term forces will soon bring in a prolonged period of slower labor force growth.

The U.S. Bureau of Labor Statistics’ most recent predictions, based on its 2008 population projections, anticipate an annual labor force growth averaging just 0.6% between 2012 and 2025. The average labor growth rate between 1948 and 2012 was 1.5%.

Upon the release of these projections from the BLS, the U.S. Census Bureau developed new population projections that anticipate slower growth in upcoming years. The latest predictions call for an average annual growth of 0.8% between 2012 and 2025, compared with a growth rate of 0.9% in the 2008 projections. The majority of the slowdown comes from reduced immigration.

So how will these population projections affect future labor force growth?

Fannie Mae set out to assess this in its latest economic and strategic research report. First, the GSE prepared a base scenario that applies future sex- and age-specific labor force participation rates from the most recent BLS labor force projections to the Census Bureau’s new population projections.

As shown by the red line below, this scenario projects labor force growth averaging 0.4% per year between 2012 and 2025, a rather anemic rate of growth when compared to postwar recessions. 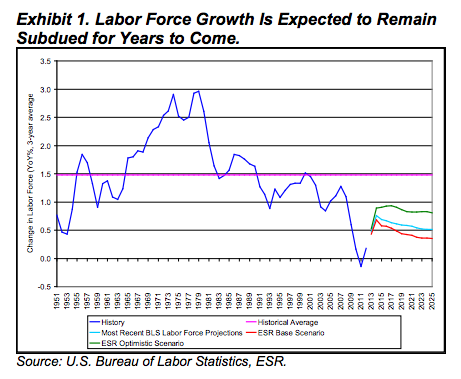 Additionally, Fannie developed a more optimistic scenario that assumes greater increases in participation rates for all sex/age groups between now and 2025 than assumed in the BLS expectations.

The green line above indicates that, even under the optimistic scenario, labor force growth would only average 0.9% between 2012 and 2025, which is still much lower than the historical average.

The projections in a decelerated labor force growth imply a slowdown in homebuilding activity as well, as the demand for new housing dissipates.

"Most fundamentally, in order to be able to pay for housing, you have to first be in the labor force and have that income coming in," Fannie Mae Director of Policy Research Patrick Simmons told HousingWire. 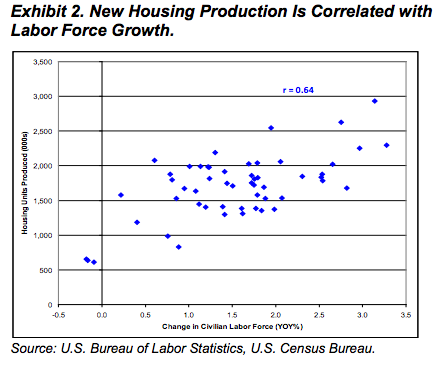 The positive correlation between housing production and labor force growth implies that the projected marked slowdown in workforce expansion in the years to come may mean weaker demand for housing and homebuilding than we’ve seen in the past. But Simmons believes we will see improvement before the decline hits.

A previous report from Fannie Mae predicted that housing starts will recover to 1.6 million by 2016, when housing is expected to normalize. The numbers indicate an added 400,000 residential construction jobs during the same time period. However, Simmons noted, if you look back at the peak of housing in 2006, there were one million more construction jobs than are estimated in these projections.