Today, the Bureau of Labor Statistics reported that 199,000 jobs were created in December — a miss from estimates. They also reported we had 141,000 in positive revisions to the previous jobs report. The unemployment rate is currently at 3.9% and we had another big print from the household survey which showed 651,000 jobs gained. For men and women age 20 and over, the unemployment rate is currently at 3.6%.

Unlike the previous expansion, where the jobs recovery was slow, we have a much different dynamic this time around. Job openings are still over 10 million and I am still smiling here as I was the one person on Twitter finance that had been tweeting out #JOLTS 10,000,000 well before the job opening data took off. I have always believed that no country has a Dorian Gray labor market. People forget that job openings were above 7 million in the previous expansion before COVID-19 hit us. Nature, aging, and deaths are powerful economic forces, and robots never took all the jobs.

With that said, the household survey jobs data is much stronger, showing an average three-month gain of 723,000 versus the BLS data running at 365,000. We do have enough labor to get back to pre-COVID-19 levels and I do expect over time to see significant positive revisions to jobs data this year. I have been counting the months to see if my forecast would be correct.

With nine months left until the end of September 2022 (the milestone in my forecast), let’s see how much progress we need:

Here is a look at the job gains and losses reported today. Construction jobs came in positive but we still have a fairly high level of construction job openings currently. The lack of construction productivity over the decades has been one reason why I have never believed in a housing construction boom in America. The other reason is that the builders don’t ever oversupply a housing market, so when demand fades, so will construction.

The builders have been complaining about labor for many years. However, the builders confidence index has picked up because they believe they can sell their product and make money since they have pricing power. This also means housing starts are rising. Don’t make it more complicated than it needs to be. 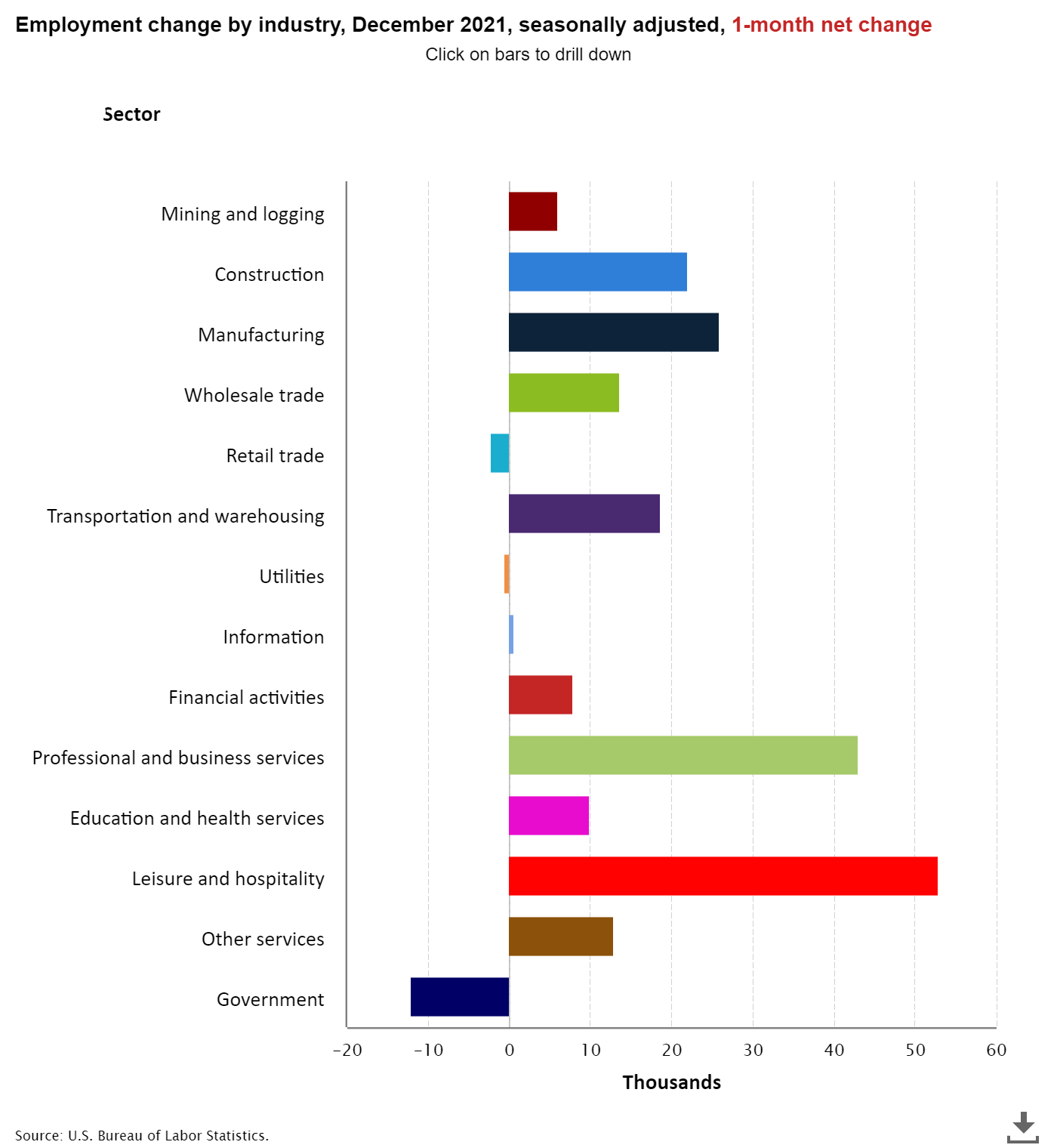 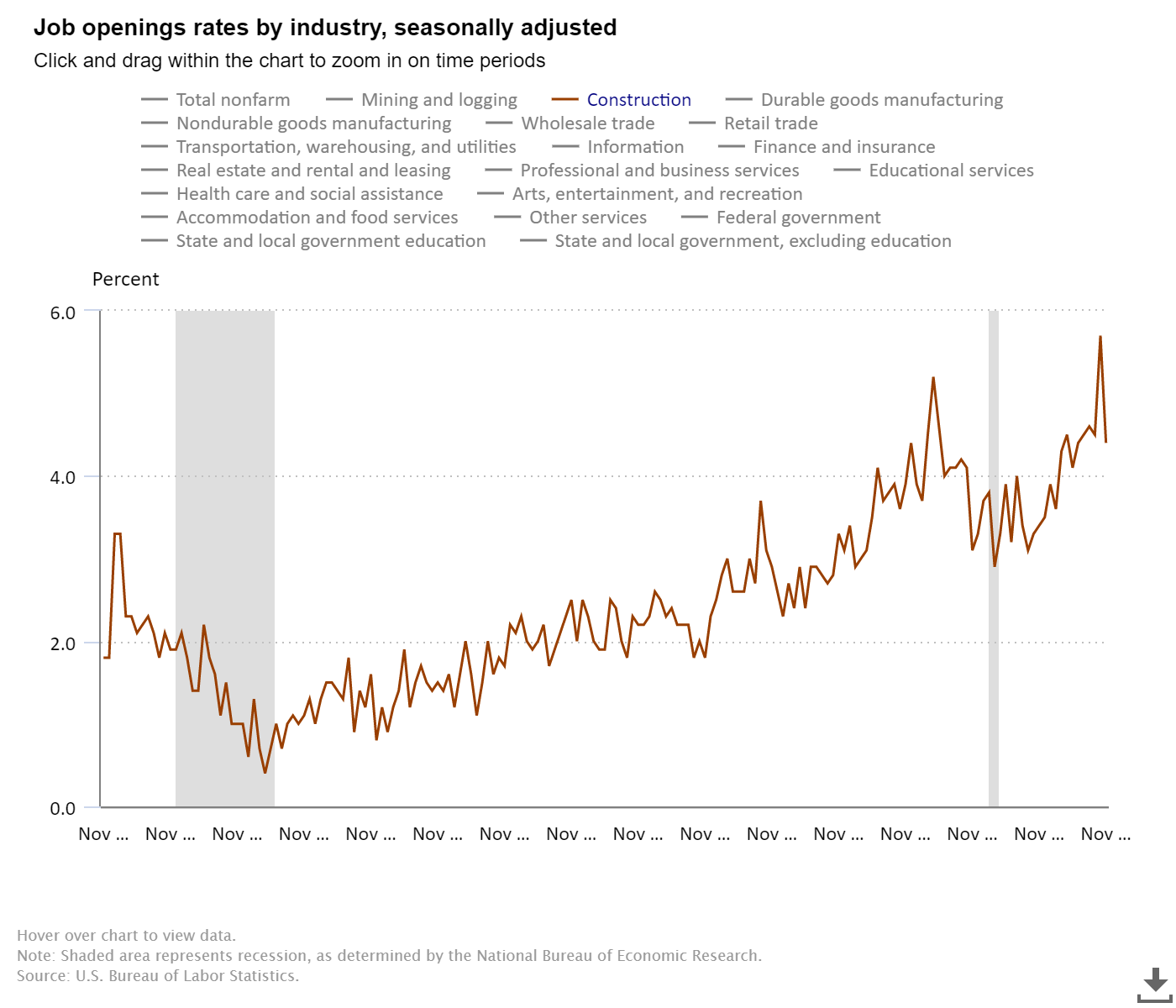 Remember that when looking at jobs data, it’s always about prime-age employment data for ages 25-54. The employment-to-population percentage for the prime-age labor force is 1.5% away from being back to February 2020 levels. The jobs recovery in this new expansion has been much better than we saw during the recovery phase after the great financial crisis.

Most people who want to work in our country are employed on a regular basis. I know that some people blame COVID-19 for not going back to work, but context is key: the majority of the country’s population is working today. The part of the labor force with the least educational attainment tends to have a higher unemployment rate. On Twitter, I started the hashtag A Tighter Labor Market Is A Good Thing to remind everyone that the economy runs hot when we have a tighter labor market.  We want to see the kind of unemployment rates that college-educated people have spread to everyone, because we have tons of jobs that don’t need a college education.

The unemployment rate for those that never finished high school has been falling sharply lately, which means the labor market is getting tighter and tighter every month. You want to have this problem rather than the other way around.

Here is a breakdown of the unemployment rate and educational attainment for those 25 years and older: —Less than a high school diploma: 5.2%.
—High school graduate and no college: 4.6%.
—Some college or associate degree: 3.6.
—Bachelor’s degree and higher: 2.1%. 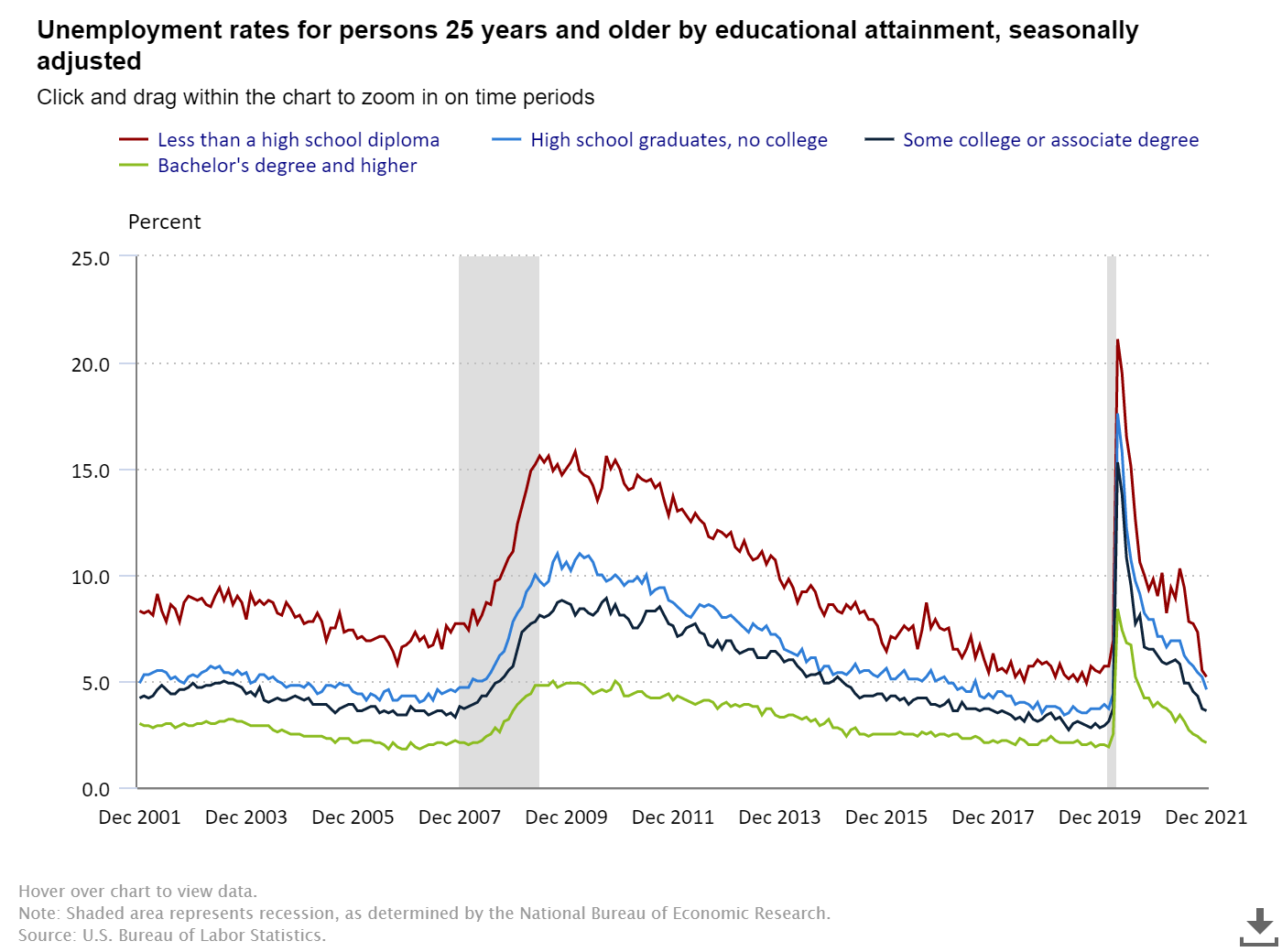 As you can see above, life is great for those looking for a job. For companies that need labor, it’s not the best news, but again, it’s first-world American problems — the economy is hot! As I have stressed from April 7, 2020, the U.S. recovery was going too fast, which would shock many people because they had no faith in their economic models.

With near record-low unemployment and massive job openings, you would assume mortgage rates should be skyrocketing, but they’re not.

The 10-year yield and mortgage rates

We had a few times in the previous cycle where the 10-year yield was below 1.60% and above 3%. Regarding 4% plus mortgage rates, I can make a case for higher yields, but this would require the world economies functioning all together in a world with no pandemic. For this scenario, Japan and Germany yields need to rise, which would push our 10-year yield toward 2.42% and get mortgage rates over 4%. Current conditions don’t support this.

Yes, it does seem strange, we have the hottest economy in decades and inflation is hot but the 10-year yield as I write this is at 1.75%. Don’t forget the trend is your friend on bond yields and mortgage rates for decades. We had a major fall in headline inflation that didn’t take bond yields lower in the same way in 2009-2010 and now you’re seeing the reverse with a short-term spike in the inflation rate of growth with yields not rising either.

Even though we haven’t tested 1.94% yet, we are getting to an exciting area where we might be able to see the first real test of 1.94% since 2019. Keep an eye on the close of the 10-year yield today and see if we get some bond market sell-off next week. If not, the bond market can rally and yields can fall short term as we are oversold on the bond report.

Now for an economic update. So far, so good, even with the Omicron cases exploding higher, we simply don’t see the economic and market reacting any more as we have learned to consume goods and services with an active virus infecting and killing us each day. This has been the case since the second surge in 2020, and even though sectors of the economy will not perform at total capacity with cases rising, it’s just not like what we saw in March of 2020.

The St. Louis Financial Stress Index, a crucial variable in the AB recovery model, is still acting bored out of its mind with a recent print of -0.9201%. This will rise when the markets react to stress, so don’t assume we will be at these low levels forever. We still haven’t had a stock market correction of 10% plus since the March lows in 2020.

The leading economic index has been very solid lately, when this data line falls for 4-6 months straight, then the topic becomes different. However, this hasn’t been the case, it bottomed in April of 2020 and has had a sharp rebound. 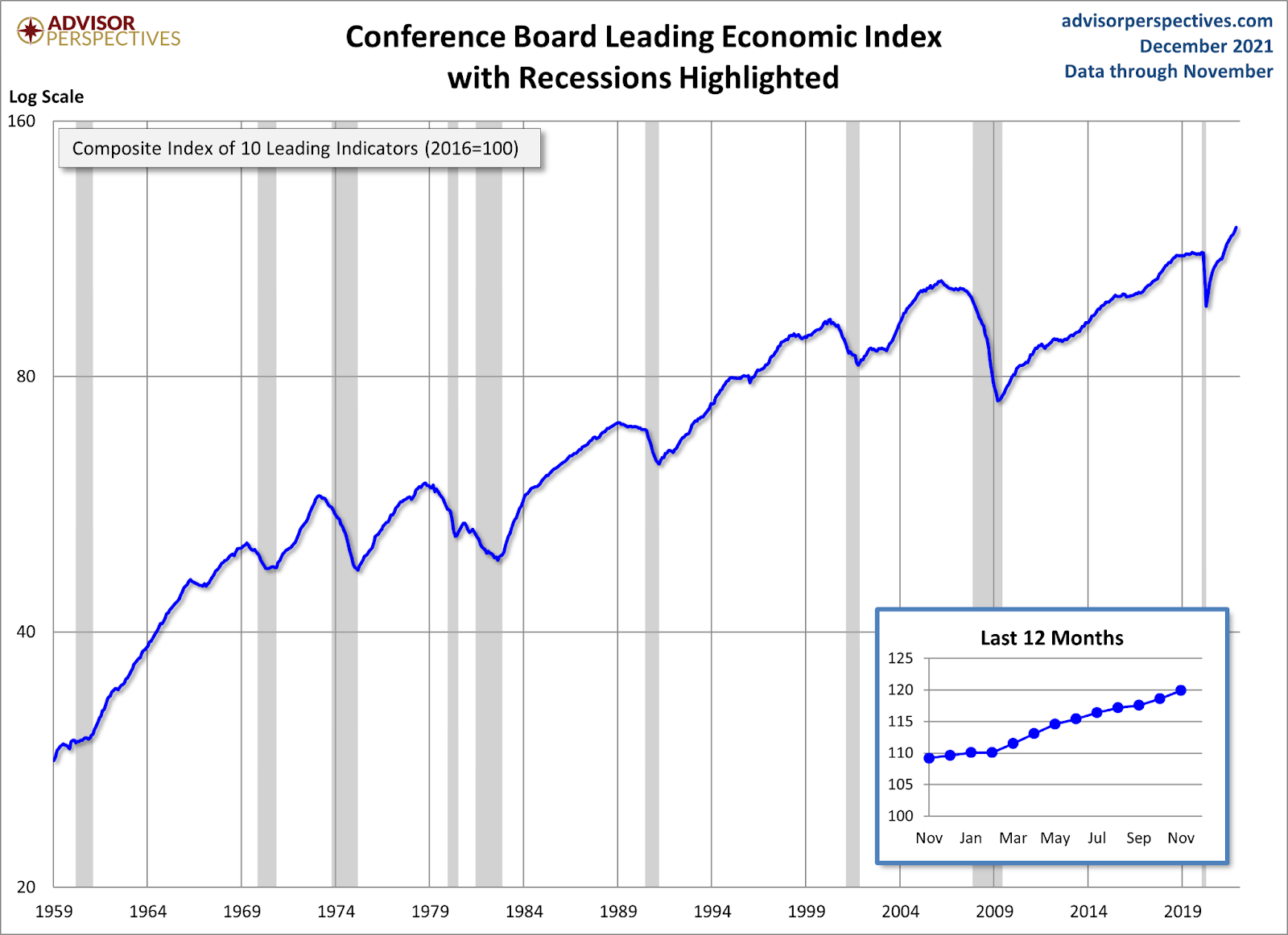 Retail sales are still off the charts, but I don’t believe we can have the type of growth we saw last year. Moderation is the key to retail sales data going out, but what a crazy ride in 2021. Expect less purchases on goods and more service spending going out, especially when we are finally done with COVID-19.

The personal savings rate and disposable income are very healthy to keep the expansion going! Even though the disaster relief has faded from the economic discussion, both these levels are good to go as employment has picked up a lot from the COVID-19 lows.

However, just like I had an America is Back recovery model on April 7, 2020, I have recession models and raise recession red flags as the expansion matures. In the previous month’s jobs report, I raised one of the flags as the unemployment rate got to 4% and the 2-year yield was above 0.56%, which means the Fed rate hike is on.

Once the Fed raises rates, the second recession red flag will be raised. My job is to show you the progress of the economic expansion, into the next recession, and out — over and over again. My models don’t sleep! Once more red flags are raised, I will go over each and every single one. At some point in the future, I will be on recession watch, when enough red flags are up. However, we are not in that time yet. Even though I no longer say we are early in the economic expansion, we are still on solid footing.