Today, the U.S. Census Bureau released their construction report for February, showing a positive trend in housing construction data with a lovely print in housing permits at 1,859,000 and housing starts at 1,769,000. The previous months of housing data have been positively revised higher as well, so this is a solid report on all fronts.

Of course, that’s until you look at the housing completion data, which hasn’t gone anywhere in years. In fact, considering the drop in builders’ confidence, now we have to watch for whether some people will cancel their building contracts because rates have jumped so much while they’ve been waiting for their new home to be built.

Housing starts data, like new home sales data, can be wild month to month, so the trend is always more important than any one report and the revisions are critical. We can have one monthly report with an extremely positive or negative print that is revised higher or lower the next month. The fact that the headline number on this report was good and the revisions were positive is a good sign. So far, housing construction has done well during 2020-2022 considering the economic drama. The housing sector has had to deal with a global pandemic, shortages of products and skyrocketing lumber costs, but in the end, mother demographics wins.

As we can see below, slow and steady wins this race. We had more housing starts during the bubble years because from 2002 to 2005 that demand curve was higher, but it was facilitated by unhealthy credit growth. The homebuyers of new homes today are very solid, but since we don’t have a credit boom in housing, housing starts will move up slowly. This is a very positive thing because it’s real. When you have a speculative credit bubble, you’re prone to a massive correction.

I see a similar story here with housing permits: the trend is your friend and slow and steady wins the race. The big difference for me in the years 2020-2022 from 2008-2019 is that the low bar in housing starts is gone. The previous economic expansion had the weakest housing recovery ever; new home sales and housing starts were working from deficient levels and didn’t have the boom that many people had hoped for. It looked pretty normal to me; I didn’t anticipate housing starting a year at 1.5 million until 2020-2024 because then the demand for new homes would warrant that much construction.

As you can see below, we haven’t gone anywhere for years now. It’s a shame that the housing market has to deal with so much drama while the U.S. has the most prolific housing demographic patch in history.

Here is where we can talk about some risks looking out to the housing market. Mortgage rates have risen since the lows we saw last year. You can make a case that a few people, not many, might not want to buy their expensive new home now that rates have just moved higher.

However, I will give a personal take on this after talking to a friend who sells new homes. The buyers are frustrated beyond belief with how long the process is taking while they watch rates rise. However, what my friend said was: What else are they going to do? The fact that total existing inventory is at all-time lows and it’s been a madhouse trying to buy a house has kept some new home buyers in line.

The recent builder’s confidence data took a noticeable fall, and there is some concern about future sales. I believe the homebuilders confidence index showing you the directional changes in the housing market landscape is critical. In 2020, we had an abnormal surge in housing data which was just showing make-up demand toward the end of the year in 2021. Naturally, the housing data was going to moderate from this pace in 2021. The housing data to me outperformed toward the end of 2021, so look for some moderation in the data coming up as well.

Regardless of that premise, keep an eye out on the builder’s confidence and the monthly supply of new homes data to gauge the health of this sector of our economy. 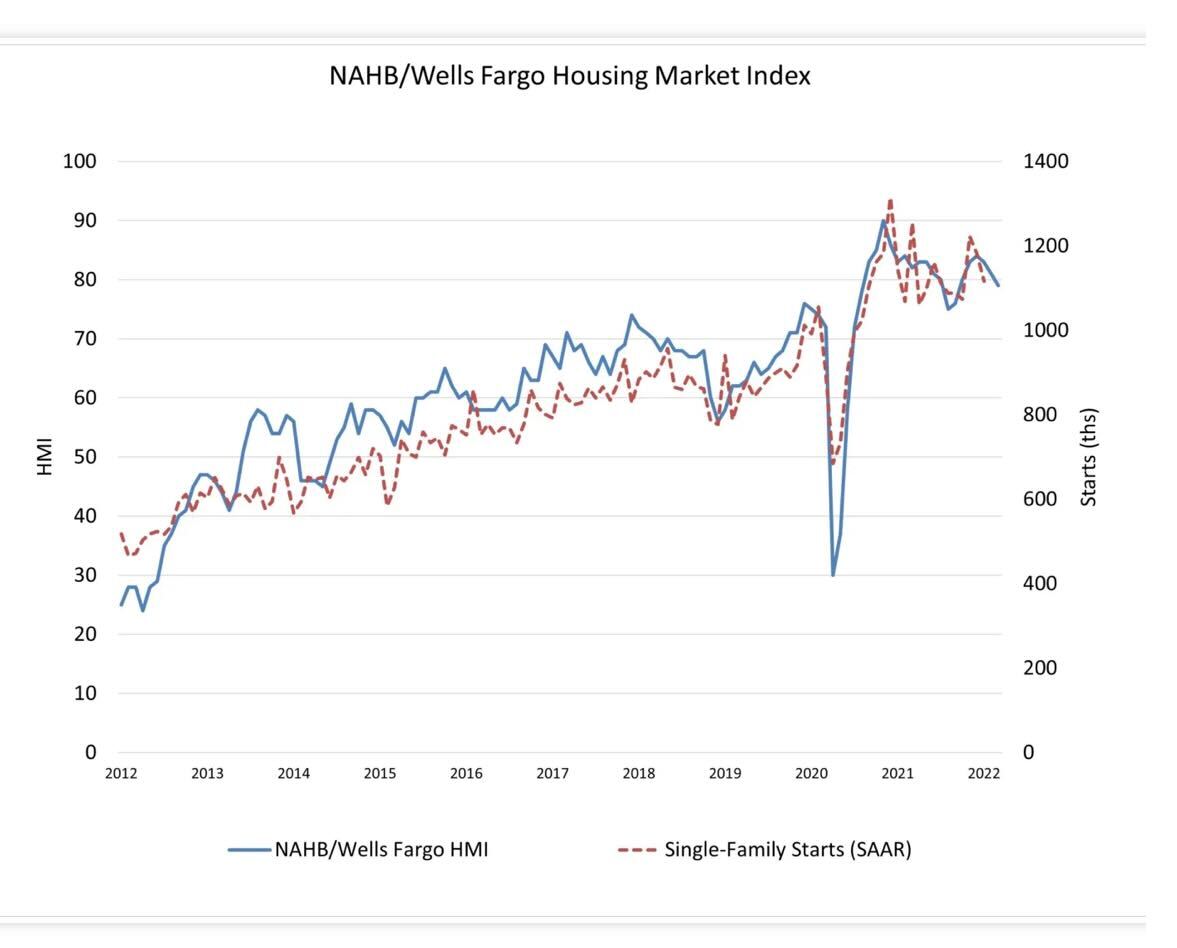 All in all, the Census Bureau’s construction report was solid and had positive revisions. However, we are still hampered by the limits of being able to finish building homes promptly. Now that rates have risen, we need to wait and see if that impacts buyers wanting their homes with much higher rates. The new home sales market is more sensitive to mortgage rates than the existing home sales market. History has shown us that when demand isn’t growing, the builders will slow down the growth rate of construction.

Could the assumable mortgage level the playing field? HW+