What a crazy year we have all been through. Last year, I visited Japan, London, Puerto Rico, Oregon and Las Vegas twice. This year I had fewer visits than that to my local barber and I was ecstatic to be there. This was the year we relearned to appreciate small things. Adventure and excitement were out, and safety was in.

On the economic front, COVID-19 was the mother of all exogenous shocks. Now, in December, we can cautiously say we made it through. On April 7, in an article for HousingWire,  I proposed an economic model that showed what needed to happen for us to proclaim that “America is Back.” Tuesday, Dec. 8, will go down in history as V-Day, the day the vaccine was released, and the beginning of our victory over COVID-19.

On Dec. 9, in another article for my blog, I made the case that the economic conditions for the AB model had been met. Considering all the wild machinations in the market that we lived through from the date of the first infections to the present, I thought it would be useful to recap some of the year’s significant economic milestones. For perspective, I am starting with the condition of the 2020 housing market before the first infections.

BC Era: Before Coronavirus

Before COVID-19, in the first two months of the year, the 2020 housing market appeared on a powerful upswing. On average, purchase applications showed double-digit growth year over year, from January up until March 18. This kind of early strength in the market was very encouraging.

Housing starts in February showed nearly 40% growth, year over year, February existing home sales broke out from trend, and new home sales started the year off strong. Overall, the February housing data was the best I had seen since the early part of the century. 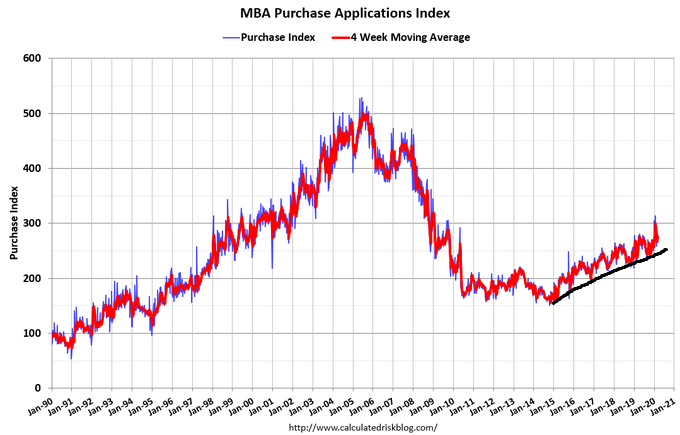 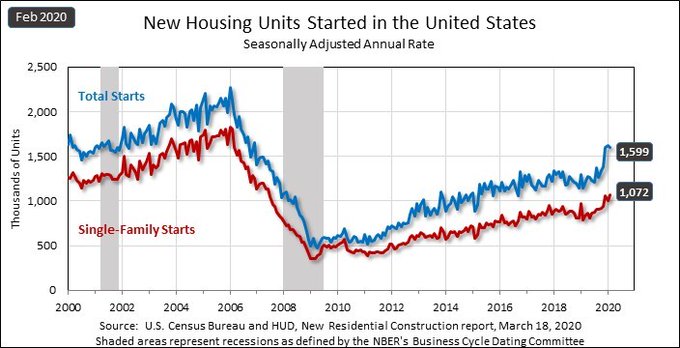 AD Era: After the Disease

Once it became apparent that the virus was here in our country,  communities began shutting down economic activity to stop the disease’s spread; the thriving 2020 housing market took a sharp dive. This was a dark and challenging time for our country. The fear of the virus froze us and froze nearly all economic sectors except those catering to our survival instincts like dry goods and, weirdly, toilet paper.

We had four straight weeks of year-over-year declines in the housing market, but then it stopped going down. The next five weeks still showed negative growth, year over year, but the data had stabilized. After nine weeks of negative year-over-year data, the MBA purchase application data went positive, up 9% year over year. Mortimer, we are back in business. 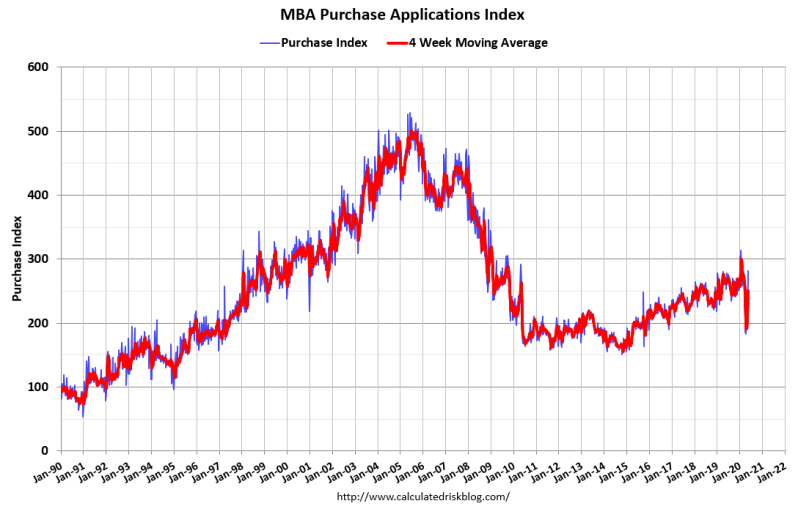 AB: America is Back

The rest of this story is for the record books. Purchase applications have enjoyed 29 straight weeks of growth, year over year, averaging over 20%. 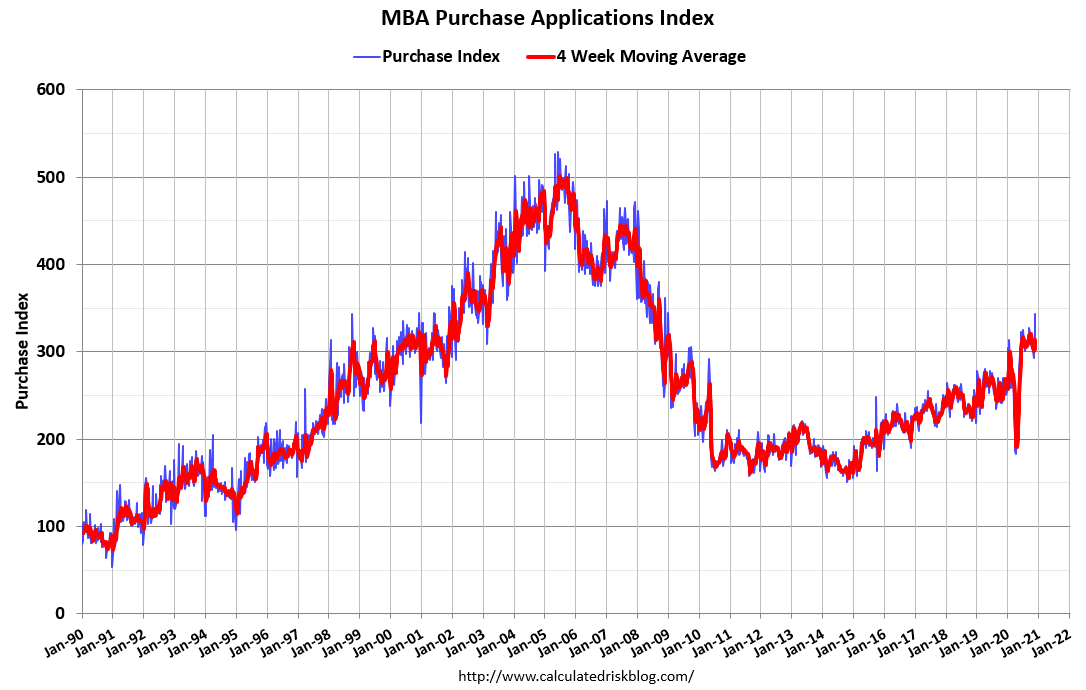 Housing starts and new home sales resumed their pre-COVID-19 upward trends, but there was one exception. Before COVID-19 hit our economy, the existing home sales print in February suggested that we would end the year with 5,710,000 to 5,840,000 in total existing-home sales. There is a chance that existing home sales will end the year at those levels. If it doesn’t make it, then COVID-19 did take demand away this year that could be made up early next year.

But the 2020 U.S. housing market will end the year as the most out-performing sector of the economy. Now is an excellent time to reflect on how this could have turned out very differently.

Despite all the wild swings in the housing market and the economy overall, credit never got tight in America. I would estimate that only 4.5%-6.2% of all loans had tighter conditions during the COVID crisis than in previous months. I talked about this on a HousingWire video because there is some confusion on this topic that credit has been tight for residential lending.

Suppose Freddie Mac and Fannie Mae had been publicly traded, with no government support. I fear to think what would have happened in this scenario. The credit markets would not have performed as well or efficiently if shareholder profits had been the bottom line instead of the U.S. housing market’s overall health and stability. The forbearance plans might not have been given so willingly early on. Let’s remember this lesson and count ourselves very fortunate that the privatization of GSEs remained an unrealized dream of some. Whistle folks. That was close.

Government intervention was also critical for the economy overall. The government assistance with disaster relief payments and enhanced unemployment payments were part of a solid fight against this deflationary crisis, and I believe the forbearance plans will continue in 2021.

We also got lucky in terms of demographics. If economics is demographics, then the U.S. housing market demographics showed its muscle this year when we needed it the most. I have been talking about the favorable housing demographics during the years 2020-2024 for a long time.

These strong demographics mean we have a healthy number of replacement buyers in America. If people start to move up, down, coast to coast, or state to state, demand should remain stable. The best housing market is a stable one. The next few years’ challenges will be demographic driven demand vs. affordability when mortgage rates rise.

The one downside of the 2020 housing market is the rapid home-price growth. My biggest concern for years 2020-2024 was that home-price growth would accelerate to an unhealthy 4.6% plus nominal growth level. I hope that as the economy recovers, bond yields will rise. Higher bond yields will result in higher mortgage rates and cool down the market, as we saw in 2013-2014 and 2018-2019.

However, as long as COVID-19 is with us, the economy won’t run at full capacity, keeping the 10-year yield under 2%. The take-home lesson from 2020 is that demographics and mortgage rates drive housing, and these two factors are at the best levels for housing in our history.

While my concern for housing is affordability, can you believe some of the housing bubble boys are still calling for a crash? You might think that after eight years of predicting an impact and getting it wrong, a lesson would be learned. But instead, these guys are doubling down and changing their failed “Covid-crash” prediction to a forbearance-crash prediction.

Let’s just say they showed their true colors this year as some of the most fraudulent, grifting, boy-band, crash cult groups ever in history. Remember, these are not real data people. Most of them probably don’t even believe their own nonsense. It’s all trolling for clicks — hashtag Sad.

Stayed tuned for my 2021 forecast, posted in Housingwire before the end of the year. And remember, my friends, always be the detective, not the troll. Math, facts, and data matter, and the rest is storytelling.