The cheapest financing in almost three years is making it easier for Americans to buy homes.

The Housing Affordability Index from the National Association of Realtors increased to 151.9 in June from 137.7 a year earlier in June. That’s a jump of 10 percent. A higher reading means homes are getting more affordable, per NAR’s magic sauce that measures prices, incomes and financing costs.

Americans trying to buy homes have been challenged with a shortage of available properties and prices that have increased at a faster pace than incomes.

The big difference between this June and a year earlier was mortgage rates. The average 30-year fixed rate was 3.84%, NAR said, compared to 4.74% last year. That meant the average monthly mortgage payment, measuring principal and interest, was $1,082 in June, compared with $1,153 a year ago. The payment as a percentage of income was 16% in June, down from 18% a year earlier.

Rates have dropped since June. The average U.S. rate for a 30-year fixed mortgage is 3.6% this week, matching last week, according to Freddie Mac. That’s the lowest rate since November 2016. A year ago, the rate was 4.53%, Freddie Mac said. 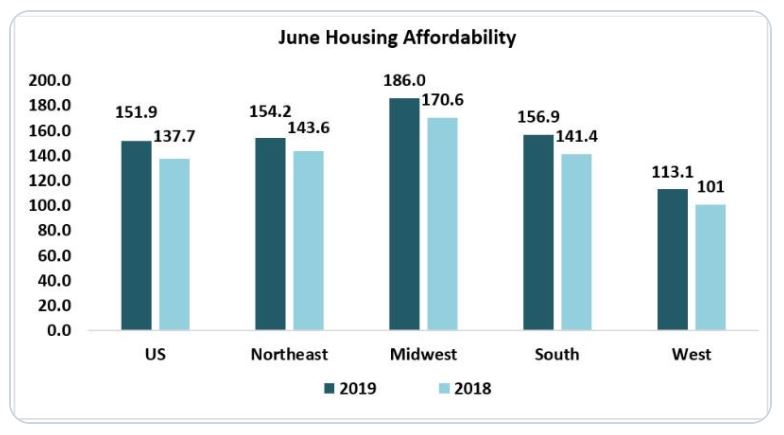 New York state announced Wednesday that it will allow those in real estate to resume providing some services, such as in-person showings, appraisals and inspections, something that had been forbidden by New York’s stay-at-home order on March 22.