I’ve seen a number of articles lately predicting that mortgage rates will rise in 2021, a couple even from other HousingWire contributors. The rationale for these predictions have been erudite, multifactorial and complex. I am, on the other hand, a simple man. Most days I don’t even wear shoes. When I think about the direction of mortgage rates there is only one factor I consider – and that is economic growth.

The trick is to find a respectable range within each economic cycle. I started to incorporate bond yield forecasts for my yearly prediction articles and every year since 2015 I had said the same range. The 10-year yield would range between 1.60%-3%. In 2020, that range broke but continued a long-term downtrend in yields which started in 1981.

Before the 10-year yield broke below 1% this year, I wrote this year that if the U.S. went into a recession the 10-year would trade between -0.21% – 0.62%. On the morning of March 9, the 10-year traded at 0.34%. Since that low point the 10-year yield has been above 0.62% for most of the time during the COVID recession. This has been a consistent strong indicator for me, that, despite all the drama in various sectors, the bond market expected the economy to improve. 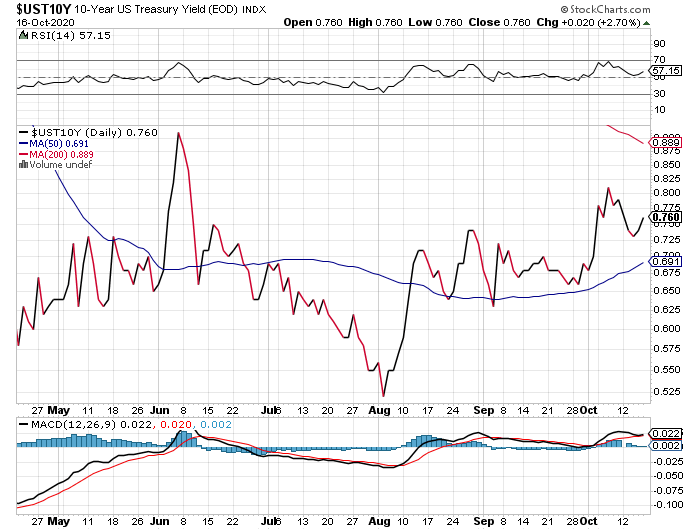 When the COVID recession hit the U.S., I proposed an economic model to track the progress of the economy. I called this model the AB Model for America is Back. The last variable that needs to be realized for this model to predict that the American economy is growing again is for the 10-year yield to break over 1% and stay in the range of 1.33% to 1.60%

Time is running out for this last variable to be checked off in 2020, but it remains within the realm of possibility. Here are the factors that can either drive yields to break above 1% this year or prevent this from happening.

Presently, the number of COVID-19 cases in the U.S. is rising again. If this trend continues, as I expect it will as we go into the winter months, we will reach new daily highs in the number of cases. The risk to the economy is that if new cases lead to such high levels of hospitalization rates, the government will be forced with much harder restriction nationally to combat the spread of the virus. Without that, the risk to the economy isn’t as great as some might think now.

Our country has learned how to continue to consume goods and services even with a virus that is infecting and killing Americans every day, the ups and downs of infection rates haven’t impacted the bond market or economic data too much recently.

Take the recent retail sales data as a case in point. Following the drastic dip at the beginning of the crisis, retail sales have now gone above the pre-COVID numbers. We need to credit the disaster relief package for some of these gains. Secondly, the fear of COVID-19 has faded away from American behavior, which means we went from hoarding toilet paper to buying homes, cars, driving more and purchasing more stuff on-line.

But, even with disaster relief, it’s impossible for the U.S. economy to run anywhere near full capacity with this virus still active in our society. Even though we have seen V-shaped recovery data in multiple sectors, certain parts of the economy are still at best treading water. Energy prices for one, prove this on a daily basis.

Eventually we will have a vaccine and multiple effective treatments to fight the virus and these will be the missing links to get our economy back to its traditional slow and steady growth like we had in the previous expansion — the longest economic and job expansion in history.

2. The election and more disaster relief

The disaster relief aid distributed to distressed Americans this year actually did what it was intended to do. Due to the fiscal aid, real disposable income and the personal savings rate have increased this year to levels above those of pre-COVID times. Even though the effects of the initial boost from the $1,200 check and enhanced unemployment benefits are fading as our politicians continue to argue about what to do next, personal savings and disposable income remain higher than 2019 levels.

If we had not implemented the massive fiscal disaster relief, and monetary actions from the Federal Reserve, I believe the bond market would still be in the recessionary range of – 0.21% – 0.62%. In my opinion, we need to continue distributing disaster relief to the economically distressed until the unemployment picture dramatically improves. I don’t expect the U.S. to run near full economic capacity until either the treatment for COVID improves to the point that only a very small percentage of cases require hospitalization and/or an effective vaccine becomes widely available.

I have to wonder why Republicans have been so resolute in their refusal to give President Trump months ago the trillions of dollars needed to juice the economy going into the election. Taking the uncertain state of the disaster relief away would have been a much-needed feather in Trump’s cap. After all, when it comes to winning elections, “it’s the economy stupid.”

I suspect that certain Republicans simply don’t believe Trump can win this election and they don’t want to pass anything that could help the economy during a Biden presidency. Also, Democrats have a 1.8 trillion disaster relief bill offered from Republicans ready to go, and trying to play your political hand too much just means a lack of disaster relief right away.

I know some would say that some Senate Republicans won’t accept the $1.8 trillion disaster relief package that the president wants now. However, I believe President Trump would get them back in line if the Democrats accepted the $1.8 trillion disaster relief package that the White House has offered. Maybe there’s a quiet agreement among politicians that something will get done before the election that is not known to the public. I know a deadline has been issued by the Democrats to get something done this week, so hopefully something gets done. For me, politics is the same always, Poly, Ticks. I regret my cynicism, but can’t shake it either.

In any case, the bond market, and thus mortgage rates in 2021, could rise if we get a sweep for either party. If Biden wins the presidency and the Democrats get the Senate, we can expect a lot more fiscal disaster relief will be forthcoming. If President Trump wins the presidency and the Republicans hold the Senate, I likewise expect a disaster relief package will be passed right away to support the president and the American people.

However, if Biden wins the presidency and the Republicans hold the Senate, then we can expect the Republicans to reprise their favorite “We are broke” song and dance – and hold back additional disaster relief as much and for as long as they can. This third scenario would be a factor in keeping bond market yields from rising. However, I believe a proven, effective COVID-19 vaccine and treatment can offset a smaller-than-anticipated disaster relief package.

GDP growth will be comparatively high in Q3 because we are working from the mother of all low bars. It will be what happens in Q4 of 2020 and the first three quarters of next year that will guide the bond market. Don’t expect the 10-year yield over 2% or mortgage rates over 4% in 2021 until we get a vaccine, approved treatments and more disaster relief. Remember, we have near 17 trillion in negative yields around the world as the world is dealing with the economic ramifications of COVID-19. As we can see with the recent jobs report, we have a lot of work to do here in America to get us back to the employment level before COVID-19.

To say that we have a lot of drama events that are about to occur from now to the end of the year would be an understatement between the election, rising COVID-19 cases and the dispute on more disaster relief. It’s a lot on the plate for the last 11 weeks of the year. Plus, the family talks at Thanksgiving this year! Even if it’s a zoom event, there might be a lot of intense family discussions.

Just remember, the bond market will get ahead of consistent economic growth, even if it’s between 1% -2.5%. We want to see higher bond yields and higher mortgage rates as that would indicate the last few economic sectors damaged by COVID-19 are healing. Once we can get the 10-year yield above 1%, then I can check my last variable in the America is Back economic model.

However, don’t forget: higher or lower mortgage rates in 2021 will be about the level of economic growth, positive or negative. What I discussed above are some factors that can play into that for the rest of the year.