As spring home buying season heats up, thousands of Americans are projected to list their homes for sale.

And although homeowners of various backgrounds will take to the market, data suggests that a specific demographic of Americans are more likely to sell their homes.

According to a recent report from Zillow, America’s average home seller is a 48-year-old Caucasian, college-educated couple with a middle-class income and a pet.

Interestingly, Zillow’s analysis indicates that the country’s home sellers are a lot less diverse than homebuyers.

In fact, only 24% of home sellers are people of color, with Hispanics making up the majority at 10%. African Americans and Asians represent 7% and 5% of the population, respectively.

This divide could partially be attributed to disparities in wages, as Zillow points out that the median household income for sellers is $72,500.

According to data from the U.S. Census Bureau, as of 2017, Caucasian and white households made more than $60,000 annually. However, the median income for Hispanic and African American households sat around 50,000 and $40,000, respectively.

Notably, the National Association of Hispanic Real Estate Professionals recently released a report stating that Hispanics represented 62.7% of the increase in U.S. homeownership. So, while they fall behind in sales, they are surely gaining in home purchases.

The image below, courtesy of Zillow, highlights home selling demographics: 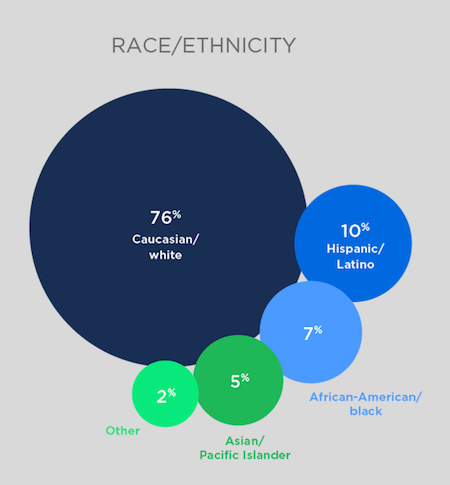 The end of the mortgage refi boom?

The refinancing share of mortgage originations in December fell to 46%, the lowest since August’s 43%, according to Ellie Mae.