It’s finally spring renting season and while the climate is heating up, data from RentCafé indicates national renting prices are as well.

According to the company’s recent analysis, the national average rent in March totaled $1,430. Not only is this a 0.3% increase from the previous month, but it is also $44 higher than the same period in 2018.

In fact, RentCafé’s data shows that 92% of the country’s largest 253 cities saw their rent increase last month. Surprisingly, only 6% of rents remained unchanged and 2% experienced slight drops compared with 2018.

So, where are these increases and decreases mainly happening? Well, according to the company’s data, rents are rising and falling mainly in small cities.

“The most significant year-over-year changes in March 2019 were experienced in small cities across the country,” RentCafé writes. “In terms of highest annual rent increases, the national scene is dominated by small cities, with Mesa, Arizona, the only mid-sized exception.”

RentCafé also points out cities in Texas like Midland and Odessa, which continue to “reign supreme” with increases of 14.6% and 13.3%, respectively. That being said, Chandler, Arizona; Mesa, Arizona; and Henderson, Nevada, are the only other cities to boast annual rent increases of over 9%.

However, other small cities like Pearland, Texas; Santa Rosa, California; and Pembroke Pines, Florida, experienced the slowest rent changes, coming in at -2.3% and -1.4%, respectively.

The image below shows annual rent changes in small cities across the country (click to enlarge): 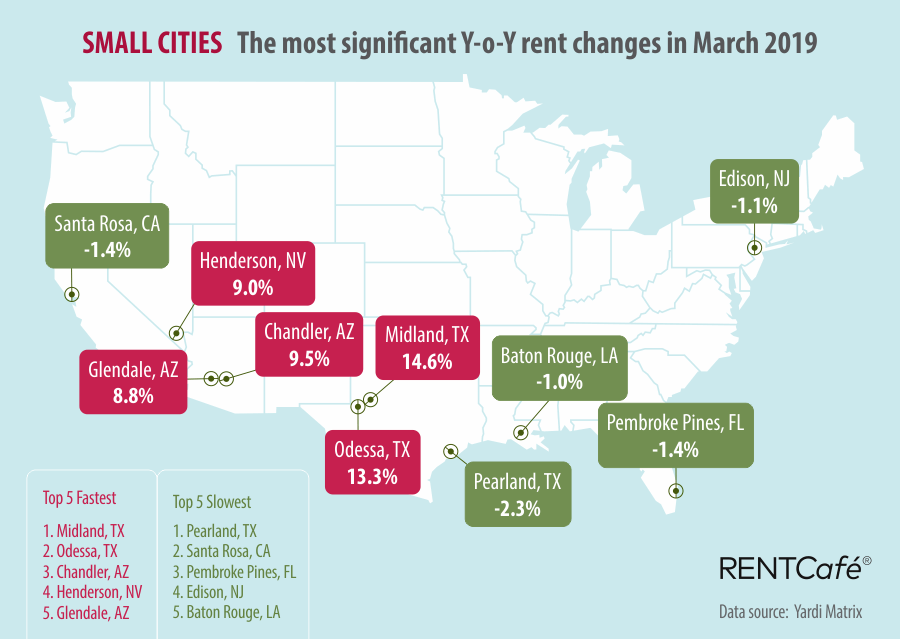