An Honest Conversation with New American Funding’s Charles Lowery and Frank Fuentes on how housing policy could impact minority homeownership.

This episode examines UWM’s recent announcement that it will no longer partner with brokers who also work with Rocket and Fairway.

Housing affordability continues to be a concern for Americans across the country, especially for those living in pricey housing markets.

Fortunately, for those struggling to make ends meet, various pockets throughout the country offer low-income families a shot at the American dream.

“Homeownership allows people to share in the prosperity of their communities and gain wealth through home equity," Redfin Chief Economist Daryl Fairweather said. "In many expensive metros, low-income residents aren't able to access the benefits of homeownership because of a lack of affordable starter homes.”

However, Fairweather notes that in housing markets like Minneapolis and Pittsburgh, low-income workers are still able to get their foot in the door on homeownership.

"Minneapolis has a large supply of condos and townhomes that are priced lower than the median for the area, which is one reason why it's affordable for people of all different means and backgrounds," Redfin Market Manager Chris Prescott said. "There are still some great locations in the area where homebuyers can purchase a single-family fixer-upper at an affordable price and build equity. Plus, it's a large geographic area, so buyers can live outside the core and still enjoy a reasonable commute into the city or find a good job in our growing suburbs."

As expected, coastal markets like Los Angeles, New York and San Diego, have the three lowest homeownership rates for households in the bottom quartile of income at 31%, 35% and 37.6%, respectively.

“Rising mortgage rates are exacerbating affordability issues that have been driving people out of expensive coastal metros for the past few years,” Fairweather said in a statement. “With rates no longer near historic lows, buyers are increasingly cost-conscious, seeking more affordable homes in low-tax states in the South and middle of the country.”

According to Redfin’s analysis, in nine of the 10 metro areas with the highest homeownership rates for low-income families, the rate went up from 2012 to 2017. Philadelphia, which fell 0.6 percentage points, is the only metro in the top 10 to experience a decrease during this time period.

The image below highlights the metros with the highest low-income homeownership rates: 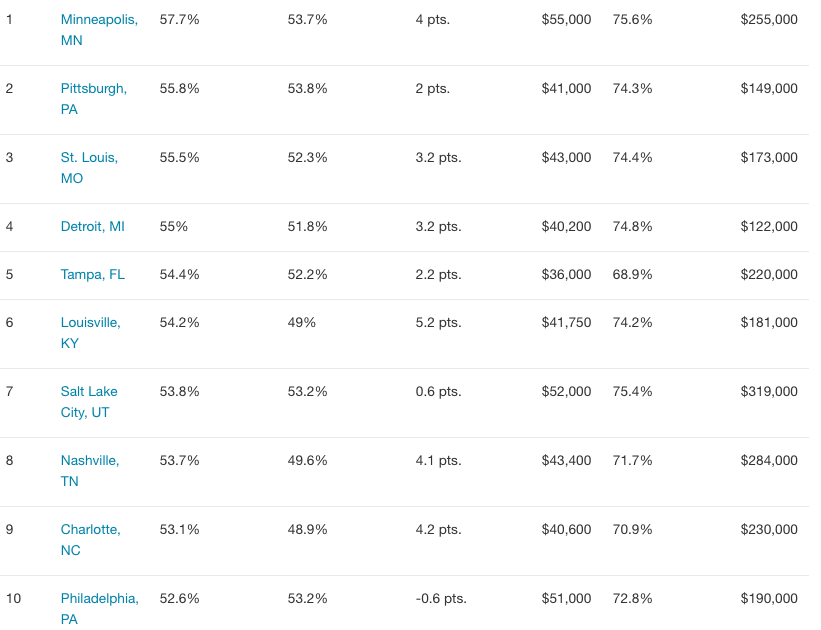 Forbearance exits more like a drip than a wave last week