Mortgage debt is traditionally the largest debt Americans hold, but student loans are steadily climbing higher on the list.

A recent study by Magnify Money, an analytical division of LendingTree, revealed that in the last two decades, student loan debt has surpassed $1.5 trillion, making it second-largest type of debt Americans hold.

Although student loan debt isn’t spread evenly across the country, the average amount of student debt per person has reached as much as $100,000, according to the report, which sought to analyze mortgage debt versus education debt.

“With student loan balances shooting up, we wanted to know how these types of debt stacked up against mortgages for people who carry both,” LendingTree Senior Research Analyst Kali McFadden said.

The report indicates that across all 50 metro areas surveyed, 5.7% of borrowers have a larger balance on their student loans than on their mortgage.

However, the average student loan balance was $18,435, but in six of the 50 metros surveyed, more than 10% of borrowers held a larger student loan debt than their mortgage.

The image below illustrates which cities have larger student loan debt than mortgage debt: 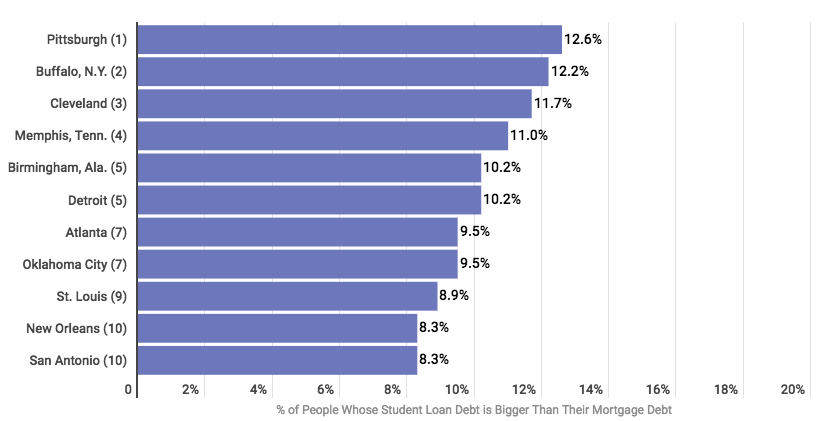 According to the report, the cities with the highest levels of student loan debt aren’t necessarily just the ones with the cheapest real estate, but suggest a tough environment for student loan borrowers.

“Clearly, property values pay a part in the ratio of student loan to mortgage debt … [However] we do see that higher student loan balances are a factor where more people owe more for their educations than they do for their houses,” McFadden said.

The student debt crisis is predicted to escalate as the oldest members of Generation Z accumulate student debt, according to a study by LendEDU.

As students accumulate more debt, the more likely they are to refrain from joining the housing market. In fact, recent data suggests this could be an ongoing trend.

Furthermore, the National Association of Realtors discovered that as the magnitude of debt continues to grow in size, the homeownership rate is falling among younger generations.

Nevertheless, although student loan debt is a financial strain on Americans, the results of Magnify’s study indicate that mortgage debt is likely to continue to be the largest burden for the majority of the nation.