Late last year, Opendoor, an online marketplace that buys homes directly from homeowners, announced that it raised $210 million to fund the company’s expansion beyond the two markets where it initially launched.

The company first began operating in Phoenix and Dallas-Fort Worth, but back in December, Opendoor said that it planned to expand to 10 new markets this year.

The company now operates in Las Vegas and Atlanta.

And as it turns out, that’s not the only way that Opendoor plans to expand; the company is also getting into the mortgage business.

The company is currently piloting a mortgage program in Phoenix, touting its ability to save homebuyers when they buy one of Opendoor’s properties.

Opendoor, which launched in 2014, operates by buying homes directly from sellers, then turning around and selling the homes on its own marketplace.

A homeowner seeking to sell their home can go to Opendoor, enter details about their home, and get a near-instant price quote for the home.

If the seller accepts, Opendoor then allows the seller to close on the sale when they’re ready, rather than on the timeline of another buyer.

From there, Opendoor makes any necessary repairs or upgrades, then sells the home through its marketplace.

According to the details provided by the company, more than 3,500 Phoenix homeowners have bought and sold homes with Opendoor. While that figure may not be earth-shattering, consider the company’s growth in just the last few years.

During a HousingWire webinar on Wednesday, Daren Blomquist, the senior vice president of communications for ATTOM Data Solutions, spoke about Opendoor and similar “instant offer” companies.

As shown in the chart below, taken from the webinar and courtesy of ATTOM, Opendoor’s growth over the last three years is significant. 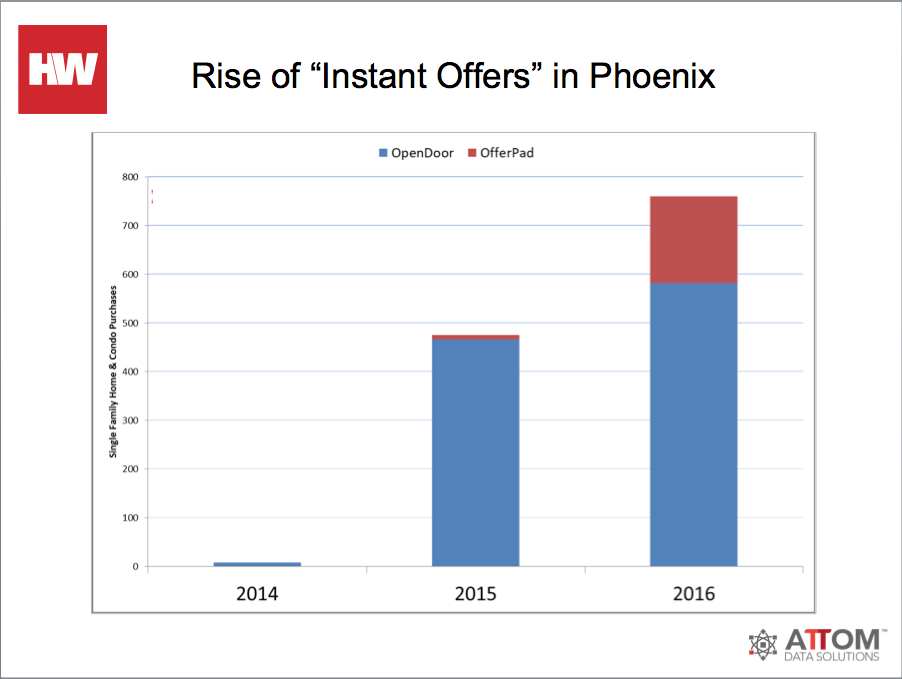 The company also claims that it is the top listing agent in the Phoenix area, and said that 10,000 “home shoppers” visit the company’s site each month.

The company now says it’s taking a similar approach to the mortgage business.

“Mortgages are typically a huge pain point in the buying process, but now Opendoor is extending the same speed and service from the buying and selling experience to mortgages, with an added boost of cost savings for the customer,” the company said in statement.

Buyers using Opendoor Mortgage will be eligible for a 1% discount off the purchase of an Opendoor home in the form of a credit towards closing costs.

“We’re fearless about reinventing every step of the transaction to put more dollars in the pockets of our customers,” the company said.

The company said that buyers using Opendoor Mortgage can get prequalified in 30 minutes and close on a home on their timeline, just as they can when selling their home to Opendoor.

The company also claims that a buyer can close on an Opendoor Mortgage in as little as 15 days. According to the company, every buyer gets a dedicated loan expert, which allows them to lock in a mortgage tailored to their financial situation.

The company also launched its own title insurance operation, Opendoor Title, to cover all parts of the real estate transaction.

“We launched Opendoor Mortgage and Opendoor Title so we could handle the process for our customers from start-to-finish and ensure a streamlined transaction,” the company said.

While Opendoor is getting into the mortgage business, the company is not acting as the lender for its mortgage program. Rather, Opendoor will act as a licensed mortgage broker that works with correspondent lenders.

Back in December, the company said that it was handling $60 million in home volume each month and served more 4,000 homeowners since it launched.

Opendoor’s latest round of funding valued the company at $1 billion, making it the latest billion-dollar company to attempt to be a true one-stop-shop for the homebuying process.

Earlier this year, Redfin revealed that it recently began buying homes directly from homeowners with a service called “Redfin Now.” That news came on the heels of Redfin launching Redfin Mortgage, which added a mortgage-lending operation into Redfin’s existing digital-focused real estate brokerage and title businesses.

Now, count Opendoor among the companies that are trying to do it all in the real estate process.

[Update: This article is now updated to reflect that Opendoor operates in Las Vegas and Atlanta.]