Despite being plagued with extremely low housing inventory, California still managed to post one of its busiest home sale months in years.

According to the latest report from the California Association of Realtors, existing home sales in California took off in June to their highest pace in nearly four years.

Closed escrow sales of existing, single-family detached homes in California came in at a seasonally adjusted annualized rate of 443,150 units in June. This is up 3.3% from the revised 428,890 level in May and up 2.4% compared with home sales in June 2016 of a revised 432,880. As a broader view, year-to-date sales are running 3.2% ahead of last year’s pace.

And notably, existing home sales remained higher than the 400,000 benchmark for the 15th consecutive month.

CAR gathers the data from more than 90 local Realtor associations and MLSs statewide. The statewide sales figure represents what would be the total number of homes sold during 2017 if sales maintained the June pace throughout the year. It is adjusted to account for seasonal factors that typically influence home sales.This chart below shows the change in sales since January 2005. 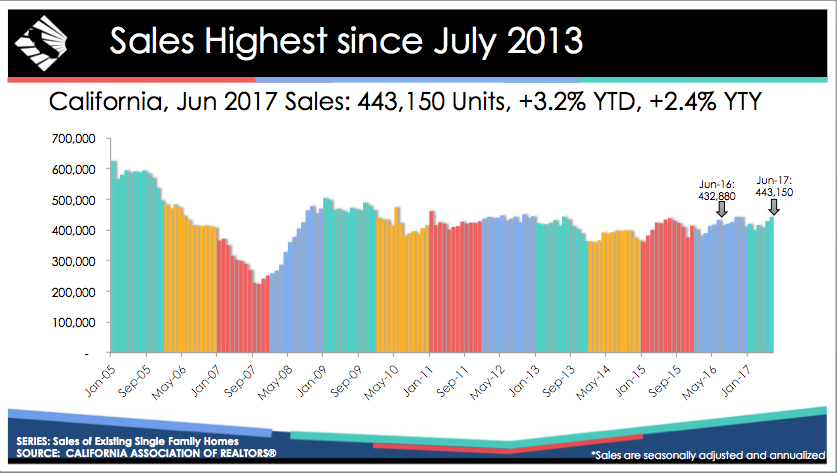 But once again, the surge in home sales did come with roadblocks, as new statewide active listings have declined for a full two years straight in June, falling 13.5% from a year ago.

As a result the states Unsold Inventory Index fell even lower, dropping from 2.9 months in May to 2.7 months in June.

The index measures the number of months needed to sell the supply of homes on the market at the current sales rate.

“A lack of available homes for sale continues to be the largest single factor influencing California’s housing market,” said CAR President Geoff McIntosh. “With active listings 13.5% lower than last June, we’ve now experienced a full two years in which active listings have fallen on a year-over-year basis and the lowest inventory level this year. Would-be sellers aren’t listing their homes as many of them would also face an inventory challenge if they were to turn around and buy another property.”

At the same time, the state’s median home price is also increasing, as seen in the chart below. The statewide median price remained above the $500,000 mark for the fourth straight month, reaching the highest level since August 2007. 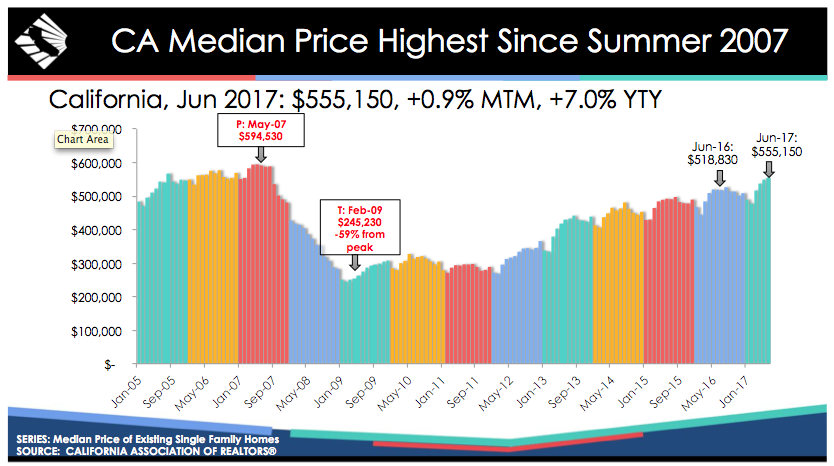 As California continues to face housing shortages, the nation as a whole is projected to witness the biggest year for homebuilders in a decade. So while the state is currently in a shortage, things should hopefully be looking up soon for homebuyers as homebuilder help fix shortage.

In the latest housing starts report, building permits for single-family housing increased, showing the uptick in housing starts in June will continue in the months to come. One expert, who served as Fannie Mae’s chief economist for more than 20 years, says the upward trend will continue throughout 2017.