After settling back around 46 days, the time to close a loan is starting to tick higher again, getting close to this year's high, according to the latest Origination Insight Report from Ellie Mae.

The most recent report stated it took 49 days on average to close a loan in November. Separated out, time to close came in at 51 days for refinance loans and 47 days for purchase.

Ellie Mae’s report, which is pulled from a “robust” sampling of approximately 75% of all mortgage applications that were initiated on Ellie Mae’s Encompass system, typically shows a variance in the time to close for refinance mortgages versus purchase mortgages, but it appears that gap is calming down as well.

The industry became hyper focused on the time it takes to close a loan after the implementation of the Consumer Financial Protection Bureau’s TILA-RESPA Integrated Disclosure rule last year, since the rule was expected to drastically impact and delay the closing process.

In the following month, right after TRID took effect, the time to close shot up to 49 days, reaching a yearly high in January 2016 of 50 days.

But this didn't last long, and come February 2016, the time was already back down to 46 and even went as low as 44 days in March and April.

And finally, by September 2016, it started to look like the time to close a loan settled at 46 days.

That is, until this latest report. After August, the time started to edge higher again, reaching 48 days in September and October and then 49 in this latest November report.

The chart below showcases all of the above data. 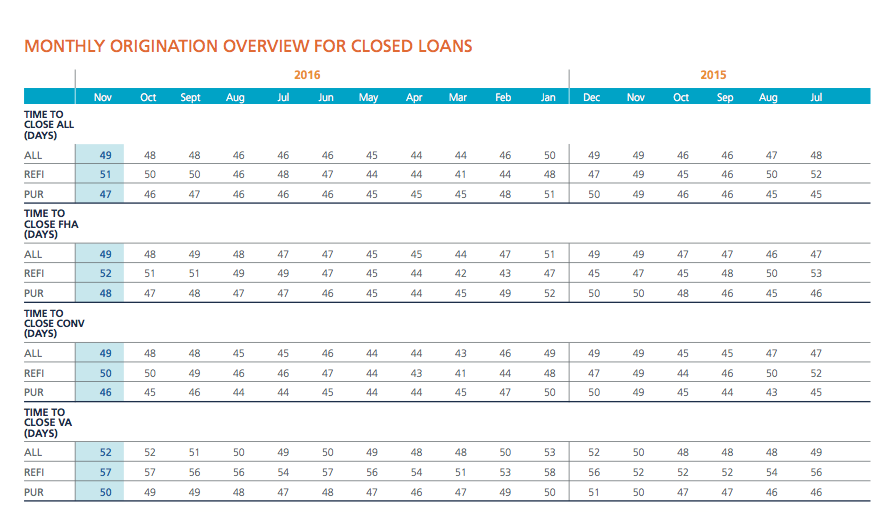