In February, the Department of the Treasury announced that it planned to boost the Hardest Hit Fund by as much as $2 billion to continue helping support the recovery from the housing crisis in the communities that were impacted the most.

The increase in funding for the Hardest Hit Fund, which was created in 2010 to help state’s Housing Finance Agencies assist “struggling homeowners” and help stabilize neighborhoods in many of the nation’s hardest hit communities, was to take place in two rounds.

The first round of funding saw the Treasury Department allocate $1 billion to the Housing Finance Agencies of 18 states, including California, Florida, Illinois, Michigan, and Ohio.

On Wednesday, the Treasury announced the second round of funding, with $1 billion more now allocated for fighting blight and helping struggling homeowners.

According to an announcement from the Treasury, 13 of the 19 participating state Housing Finance Agencies will receive additional funding.

“While the housing market continues to recover we know some homeowners and areas are still experiencing the damaging effects of the housing crisis,” McArdle added. “With this additional funding, states will be equipped to continue their great work in getting critical resources to those most in need.”

In the first round of funding, the Treasury allocated $1 billion to 18 of the 19 participating Hardest Hit Funds states based on a formula combining the affected state’s population and the state’s usage of its previously allocated HHF funds.

In order to qualify for the first round of funding, states must have already utilized more than 50% of their previous HHF allocations.

In some cases, the affected states have already exhausted 100% of the previous HHF allocations, and this new round of funding will allow those states to reopen their HHF operations.

The second round of funding, on the other hand, was open to all participating HFAs, even if 50% of their previous funds have not been used yet, but the HFAs were required to submit detailed applications that demonstrated an “ongoing need” for additional funding to prevent foreclosures and stabilize housing markets.

The HFA’s were also required to show a “reasonable plan of action” to address those needs and fully utilize the funds by Dec, 31, 2020, which is the new deadline for the use of HHF money, rather than the program’s previous end date of Dec. 31, 2017.

Those states are Alabama, Arizona, Florida, Nevada and South Carolina.

According to the Treasury, Alabama was ineligible for the first round of funding due to the fact that the state had not used 50% of its original HHF money, and therefore did not apply for the second phase.

Georgia received $30,880,575 in the first round of funding, but will not receive any additional funding, despite applying, due to “its performance to date and other factors,” the Treasury said.

See the graphic below for the full details on this round of HHF allocations, complete with total HHF funding thus far for each state. 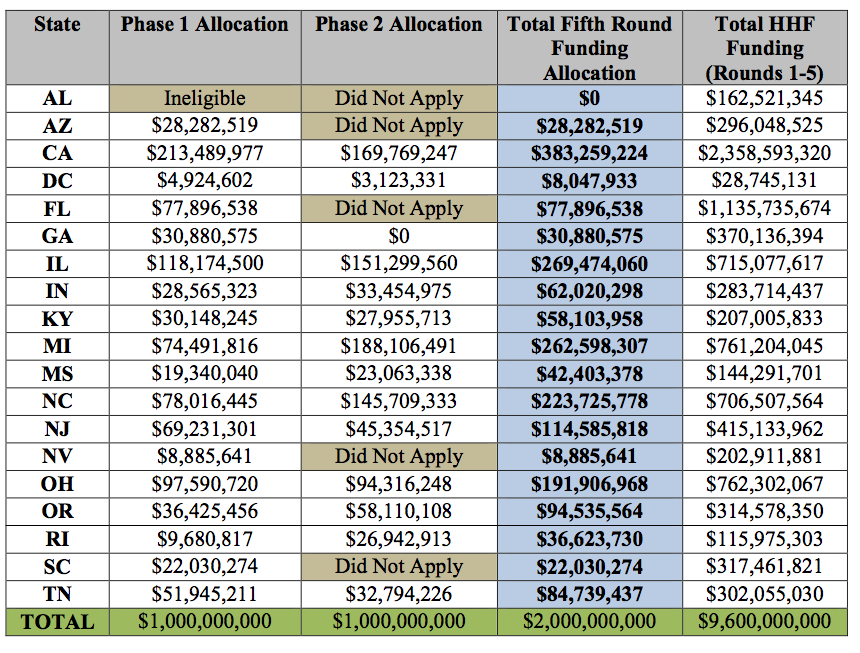 Get ready for HousingWire Annual 2023 HW+

HousingWire Annual is bringing together mortgage, real estate, and appraisal to help our audience develop partnerships.