It aired to the massive audience, many of whom then promptly proceeded to fuel bombastic panic on Twitter, claiming that Rocket Mortgage will lead to the housing crisis redux.

First off, calm down, everyone, the Rocket Mortgage will not collapse the American housing market, again, despite the outrageous claims of some.

There is, however, a much larger concern to be faced here.

Twitter will always be a problematic area for business, usually responsible for more harm than good.

But when did Tweets replace appropriate sourcing? 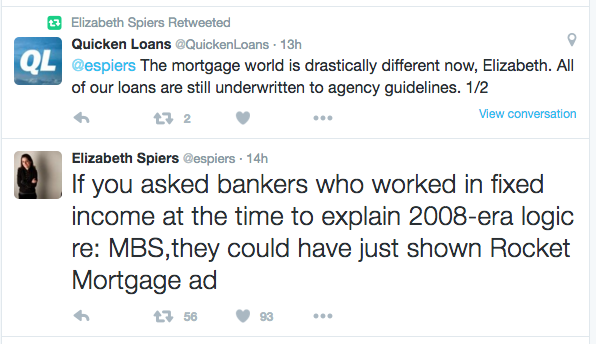 This level of conversation is fine, despite being baseless, for it should be largely harmless to operations.

Now, when Alexandra Mondalek of Time Money then decides Spiers' Tweet on Quicken counts as valuable commentary, we have a problem.

Mondalek parades tweet after tweet, none from housing experts, all of which decry Quicken's ad as the coming of the housing apocalypse, and then tosses this onto her article: “Twitter users responded to the ad in real-time, and most weren’t keen on the idea of another housing bubble.”

Another housing bubble? Sure, according to Chris Brown the editor of Smartfootball, who's written extensively for ESPN's defunct Grantland.com on football, not on housing.

Sadly this level of assumptive journalism is becoming more common.

Jacob Brogan, who writes for Slate about technology and culture, pulls the same vox populi card in his coverage.

April Siese at Bustle inexplicably calls Quicken "tone deaf" in her headline, then refers to the Twitter laundry list as "financial experts," which would be laughable, if it wasn't a little more than sad.

Siese links to a tweet from no less than the Consumer Financial Protection Bureau, which sub-tweeted (sub-tweeting is publicly calling out someone or something without specifically identifying the target, but doing so in a manner where it's clear who you're talking about) Quicken Loans last night after the ad ran.

The CFPB's tweet read: When it comes to #mortgages, take your time, ask questions and #knowbeforeyouowe.

Quicken Loans, as it did with many other people who griped about the ad, responded to the CFPB this morning.

.@CFPB We agree. No better way than #RocketMortgage for full transparency into mortgage options & info needed to make the right decision.

But as is usually the case with these things, the original tweet from the CFPB was retweeted 288 times, while Quicken's response was retweeted twice, and one of those was done by Bill Emerson, Quicken Loans' CEO.

Luckily, balanced coverage can be had on the subject.

Andrea Riquier reports on housing from the Washington bureau of MarketWatch, her take is here and largely balanced, though she includes Spiers tweet too.

Another housing veteran journalist, the Wall Street Journal's Nick Timiraos, also looked to deflect some of the criticism by actually listing Tweet from people who may actually know what they are talking about.

Timiraos even goes so far to question if the economy is even robust enough to boom in the first place, much less crash in the Rocket aftermath:

"Right now, the U.S. economy doesn’t look poised for much of a consumer-driven economic boom. Mortgage lending standards aren’t getting dramatically looser, and while household debt levels are down from their 2008 peak, they are still elevated."

But why let reason stand in the way of journalists promoting unfounded panic on social media?

It's just too much fun this way.

(Image above courtesy of PiXXart / Shutterstock.com)

People take the politics of a place into consideration when deciding where to move, but other factors including housing affordability and access to jobs and schools take priority, Redfin study shows