Housing markets across the country are steadily making their way into the stable range, according to Freddie Mac’s latest Multi-Indicator Market Index (MiMi).

The MiMi monitors and measures the stability of the nation's housing market, as well as the housing markets of all 50 states, the District of Columbia, and the top 100 metro markets.

The most recent report said the national MiMi value now stands at 81.9, indicating a housing market that is on its outer range of stable housing activity, while showing an improvement of 0.59% from September to October and a three-month improvement of 1.54%.

On a year-over-year basis, the national MiMi value has improved 6.31%.

"The strong annual change of 6.31% is the best improvement we've seen in the MiMi on a year-over-year basis since July 2014,” said Freddie Mac Deputy Chief Economist Len Kiefer.

“While strong home purchase applications and rising home values in some markets are contributing to this improvement, its largely more of a reflection of mortgage delinquencies continuing to decline at a steady pace, especially in those hardest hit markets, and a better employment picture overall,” he said.

Although the national MiMi has rebounded 38% since its all-time low in October 2010, it still remains significantly off from its high of 121.7. 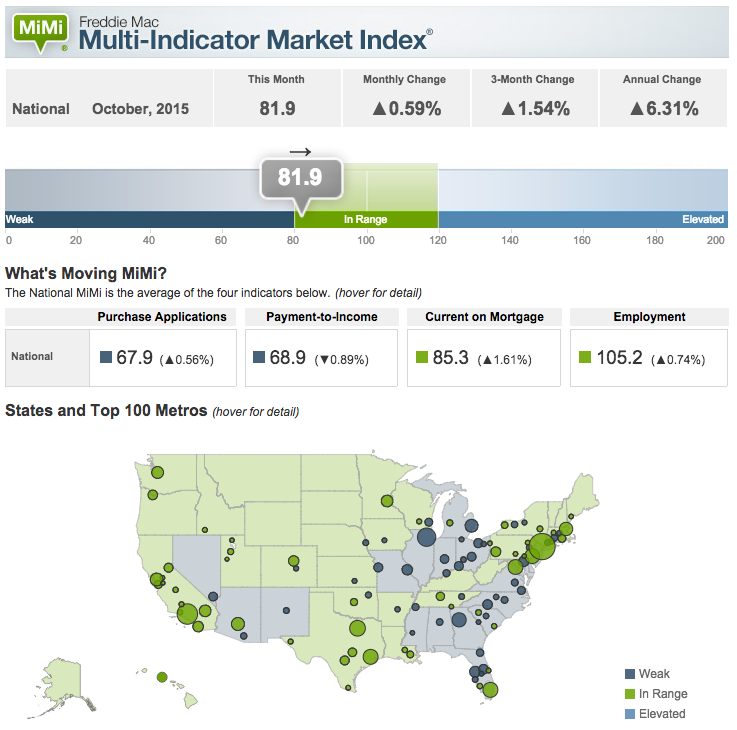 As for next year, Kiefer said that while Freddie expects homebuyer affordability to decrease, they don't expect tighter monetary policy to generate a spike in longer-term interest rates in the foreseeable future.

“The Fed has committed publicly to measured increases in short-term rates. While mortgage rates will rise modestly, they will still remain at historically low levels. Combined with stronger job and income growth, the net result may be strong growth in household formation, construction, and home sales,” Kiefer said.