Freddie Mac sold a total of $591 million in deeply delinquent non-performing loans from its mortgage investment portfolio, after announcing the sale back at the beginning of the month.

This came to a total of 3,577 NPLs that were offered as three separate pools of mortgage loans.

The three pools, winning bidders and cover bid prices (second highest bids) are summarized in the chart below: 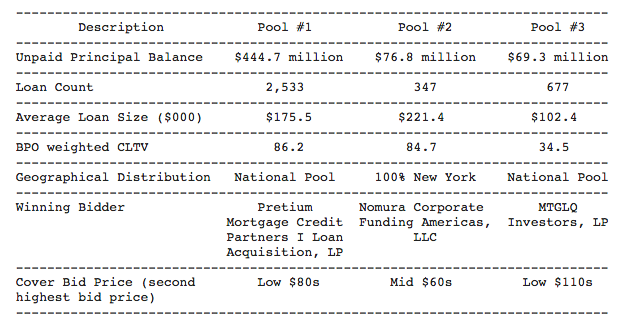 The transaction is expected to settle in September 2015 and the sale is part of Freddie Mac's Standard Pool Offerings.

These loans have been delinquent for approximately three years, on average. Given the deep delinquency status of the loans, the borrowers have likely been evaluated previously for or are already in various stages of loss mitigation, including modification or other alternatives to foreclosure, or are in foreclosure.

Freddie Mac sold its largest ever portfolio of seriously delinquent loans from its portfolio back in March, getting rod of 5,398 deeply delinquent non-performing loans.

At the beginning of March, the Federal Housing Finance Agency stated the new requirements for sales of NPLs by Freddie Mac and Fannie Mae to make sure the loans go to capable mortgage servicers.