After a successful Denver-area home flip in 2016, newly minted real estate investors Scott Stuber and Tyrone Velasquez realized they could get more bang for their buck investing elsewhere.

“We were looking for a more affordable market. Denver has gotten so expensive. You’ll find a house at the top of the market that needs to be fully rehabbed — there’s no potential profit there,” said Stuber, who now invests full-time, running Nuremberg Properties with Velasquez, his husband. “So we decided to look for more affordable markets that were being overlooked.”

Stuber and Velasquez are not alone in their quest to find overlooked markets that are more affordable and profitable for their real estate investing strategy.

Expensive home prices, high property taxes and anti-investor legislation are prompting a growing number of real estate investors to invest remotely outside where they live.

States with an above-average percentage of buyers purchasing properties in another state included Stuber’s home state of Colorado (51%), followed by California (44%), Nevada (39%), Arizona (35%) and New York (27%).

Nationwide, nearly one in five REO properties sold on the Auction.com platform in 2019 (19%) were purchased by out-of-state buyers.

“Our nationwide platform allows real estate investors to buy bank-owned inventory far beyond their backyard with just a few clicks of the mouse,” said Jason Allnutt, CEO of Auction.com.

“Investors are no longer constrained by state or other geographic borders when it comes to finding the optimal markets and properties for their investing strategy, and they can easily shift to new areas if changes in market conditions or regulations warrant a shift.”

From Denver to Dayton

Stuber and Velasquez ended up buying in Dayton, Ohio.

“I grew up in Ohio, so I was very familiar with Dayton,” Stuber said, noting that the couple also considered Gainesville, Fla., and some Illinois markets before landing on Dayton.

“Florida is actually where we started. Tyrone is originally from Gainesville. … But Gainesville has kind of become like Denver. … We looked at Illinois, but their property taxes are extremely high.”

Eventually the couple found a property they liked in Dayton at a price point that worked for the buy-rehab-and-rent strategy they planned to employ. After finding the first one, they began looking for more.

“We put three houses on our list from Auction.com, and I flew out to Ohio to take a look at them before the auction. Of those three houses, we actually ended up buying all three,” Stuber said, adding that those first three properties were all purchased within a month of each other, two for about $8,000 each, and the third for around $26,000. “We’ve actually had really, really good luck with Auction.com. It’s really easy to do it.”

The couple went on to purchase a total of 12 Dayton rental properties over a period of 14 months, according to Stuber. They typically spend $10,000 to $12,000 for property renovations — often more than the purchase price — before renting it out for between $700 and $800 a month.

“We don’t want any property we have to rent for more than $800 a month [because] we try to keep the lease price affordable for the everyday working person,” Stuber said. 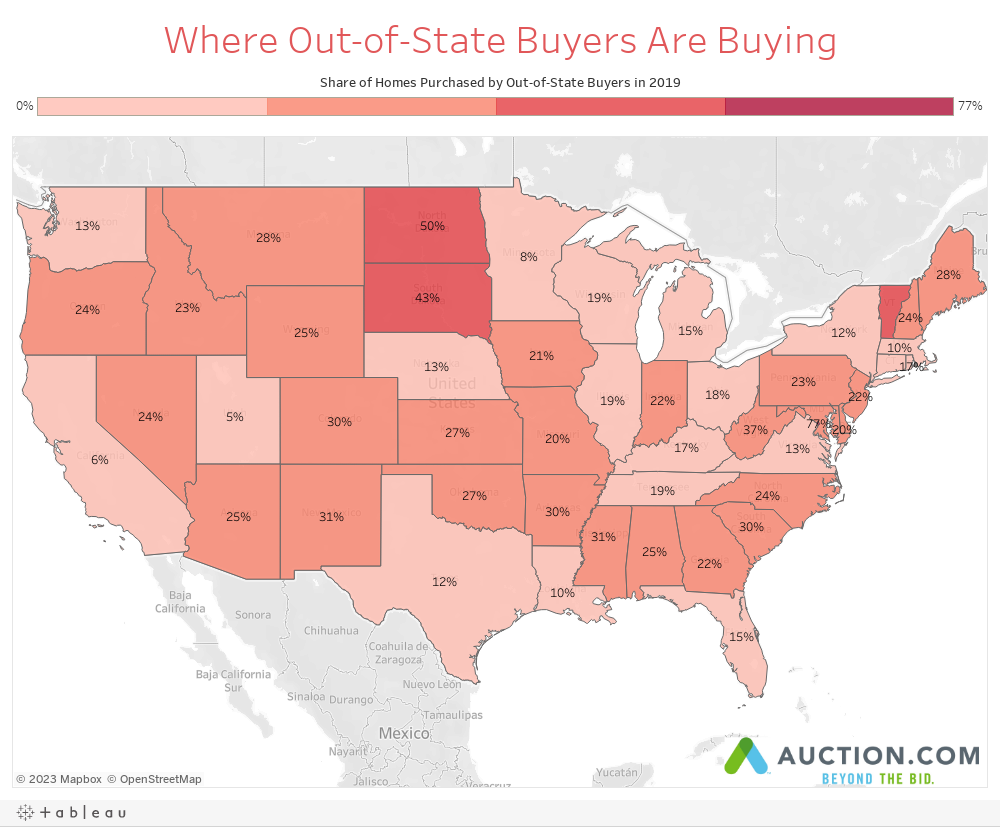 Improved technology, data and services have made remote investing more convenient even for smaller-scale investors like Stuber and his husband — 77% of buyers using the Auction.com platform planned to buy between one and 10 properties in 2019, according to the company’s 2019 Buyer Insights Survey.

Those smaller investors are following a path blazed by larger-scale investment companies like Memphis Invest, which began venturing into other markets a decade ago. Early this year, the company changed its name to REI Nation because it has expanded far beyond the Memphis market where it began.

“It was 2008 that we made a concerted effort to do marketing to investors outside our area,” said Chris Clothier, co-owner of the company, which now also operates in Dallas, Houston, Oklahoma City, Tulsa, Little Rock and St. Louis — with more cities on the horizon.

“[Now] you have companies, that’s all they do is work with out-of-area investors … and you have a lot more companies like mine that are packaging [remote investing] services together. So, it’s gotten much more easier than ever to invest far from home.”

From the beginning, Memphis Invest found success marketing to individuals with the ability to buy multiple houses in the Southeastern and Midwestern markets where the company acquires properties.

Many of those individuals live in high-priced coastal markets — California and New York represent the two top states in terms of the most Memphis Invest clients — but the company has discovered that the motivation for remote investing goes beyond just capital in search of returns.

“It had less to do with that they had disposable income and had more to do with the fact that people wanted to be passive, and it’s easier to be passive when you buy far from home,” Clothier said, noting this discovery became apparent when the company expanded its acquisition operations outside of Memphis. “The investors we had in Texas, they wanted to buy in Memphis, and the investors in Memphis, they wanted to buy in Texas.” 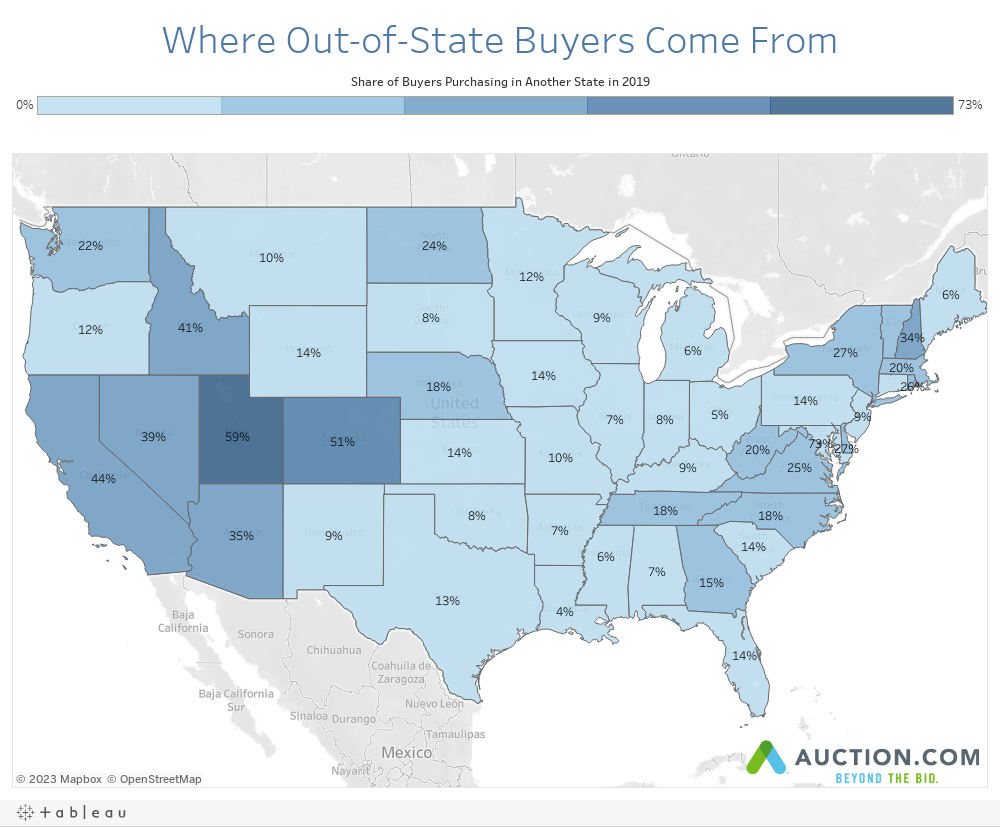 A quick pivot to tertiary markets is possible thanks to remote investing technology and services that investors have grown comfortable with over the past several years.

Stuber no longer flies to Dayton before each home purchase as he did with the first three homes the couple bought. He’s come to rely on a network of data, technology and boots-on-the-ground resources that allow him to close transactions quickly without ever seeing a home in-person prior to purchase.

“We’ve bought two or three houses in a day,” Stuber said, noting that he uses online banking to transfer the funds directly to Auction.com when he purchases a home on that platform. “It’s really nice to have remote closings. We never have to leave Denver to close on a house.”

In most states, only REO properties are available for online bidding due to state statutes written decades or even centuries before the advent of the Internet.

Stuber’s boots on the ground in Dayton include a team of contractors that help with rehab and property maintenance and are also able to scout out prospective purchases if Stuber himself is not in town, along with a property management company that finds tenants and collects rent.

Stuber utilizes a property maintenance workflow app called Latchel to manage property repair requests from tenants and a Rently key box that allows prospective tenants to view properties on their own.

“As investors get more and more comfortable with investing remotely, the one thing that technology cannot do is the one-to-one, face-to-face interaction that at some point we advise any investor to do,” he said, noting he has encountered many investors who have been hurt by skipping this step.

“It doesn’t matter the price of your investment – if you aren’t willing to spend the hundreds of dollars it takes for you to get on a plane and meet with the people you are doing business with, you shouldn’t be investing passively.”

Although he doesn’t fly out before every purchase anymore, Stuber said he’s still a frequent flyer on the Frontier Airlines route between Denver and Dayton, and he recommended that investors spend time in any market where they plan to purchase.

“Make sure they check out the market. Make a trip there and see the city. Get a feel for the city,” he said. “Find out more about the locations of the properties, different neighborhoods. It’s important to spend some time, interview some contractors, develop a good team of people.”