As housing affordability becomes a top concern for homeowners across the country, a new report from NerdWallet indicates many are refraining from moving in order to evade relocation costs.

According to the company’s data, 26% of Americans would prefer to live in a different location type, ranging from city, suburb, small town or rural area, but many cite financial reasons as the primary obstacle to getting there.

In order to determine this, the organization surveyed more than two thousand American adults, gauging their perspectives on housing affordability and relocation.

According to their findings, affordability is the biggest blocker to moving as 45% of those surveyed claimed that they could not afford to live in their desired housing market.

“When it comes to where we live, some are cursed with more options than opportunities — it’s not as simple as packing up and going,” said NerdWallet Mortgage Expert Holden Lewis. “We long to leave our sleepy suburbs for the exciting city, or we dream of ditching the city for a quiet small town. But moving is expensive — you have your job and a new cost of living to think of, and you’re often leaving friends and family behind.”

NerdWallet states that for most Americans, metro area homes are outside the normal range of affordability. According to the company, in close to half of the nation’s 25 most populous housing markets, homes are selling for at least five times the median income for that location.

Capital Economics recently reported that home prices are expected to climb by 3% by the end of the year, placing housing affordability even further out of the reach of most American homebuyers.

Perhaps this is why NerdWallet’s survey discovered that most American renters would rather move to a new market than purchase a home.

“Renters would forgo homeownership to move,” NerdWallet writes. “About six in 10 (61%) renters not living in their ideal location would rather give up the opportunity to own a home where they currently live if they could rent in the area they prefer.”

For those willing to move to a home, NerdWallet claims that 69% of those not living in their ideal location would take action to make it happen. Among them, the company indicates that 38% are willing to start working or take on a second job, and another 28% are willing to give up all leisure travel.

“Moving forces you to change the way you save and spend,” Lewis says. “That goes double if you’re buying a home in the new place. If relocating is a top priority, you might have to sell a car, take a part-time job or cut your spending. But these sacrifices may be totally worth it if you end up in your dream surroundings.”

The image below highlights those unsatisfied with where they live based on their current location type: 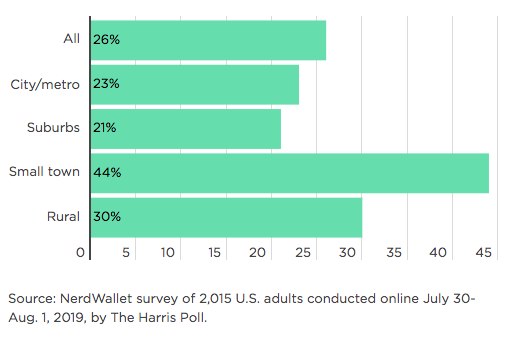