More than half of all homeowners with a 30-year mortgage are now paying interest that’s 0.75% or higher than current rates, the largest share in six years, according to Black Knight.

Of those, 11.7 million are “refi eligible,” meaning they also meet broad-based underwriting criteria such as credit scores at 720 or above and enough equity to satisfy most lenders, Black Knight said.

“This is the largest number of `high-quality’ refi candidates since Black Knight began tracking the data point in 2000,” the company said in a statement.

That includes most of the mortgages originated in 2018, before trade wars and recession fears sent mortgage rates tumbling through most of 2019.

“Keep an eye on the 2018 vintage: 80% of active mortgages originated last year have interest rates at least 0.75% higher than where they are today,” Black Knight said. “Some 5 million mortgages were originated in Q2 to Q4 of 2018 when rates averaged 4.5% or higher, representing 10% of the active mortgage universe and 17% of all refinance candidates.”

Cash-out refinancings, in which borrowers tap some of the equity in their homes and get money at the loan closing, are making a comeback. In 2019’s second quarter, 62% of all refinance lending was for cash-out mortgages, Black Knight said.

Tappable equity reached an all-time high of $6.3 trillion in the second quarter as home-price gains made real estate more valuable, the mortgage data company said in a report last month. The new record high is 26% above the 2006 peak near the end of the housing bubble.

The average owner with tappable equity has $140,000 available to borrow against, Black Knight said.

Mortgage rates have tumbled in recent months on signs the economy is slowing. The average U.S. rate for a 30-year fixed mortgage was 3.49% last week, according to Freddie Mac. That’s almost a full percentage point below a year earlier. 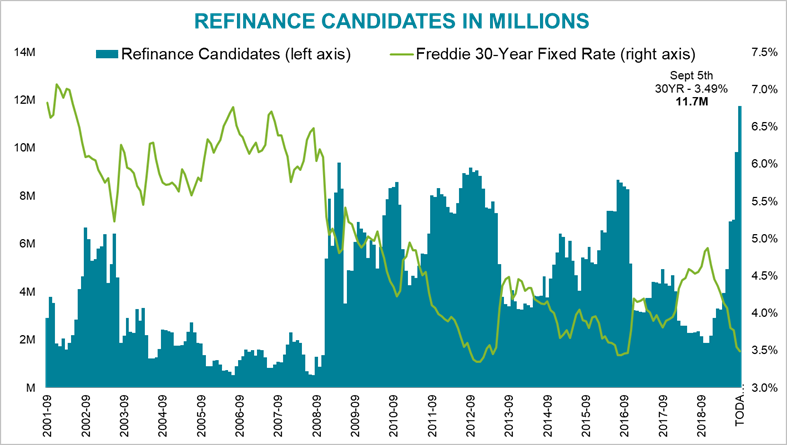