Apartment occupancy rates climbed in July to their highest level since 2000, according to a report from RealPage, which revealed that occupancy rates rose 0.4% from last year to reach 96.2% last month.

Of the nation's 50 markets, each one saw at least 1% growth, RealPage said. Of the nation's 150 major markets, 91 of them met or exceeded the national norm for occupancy and hit the effectively full mark of 95%. 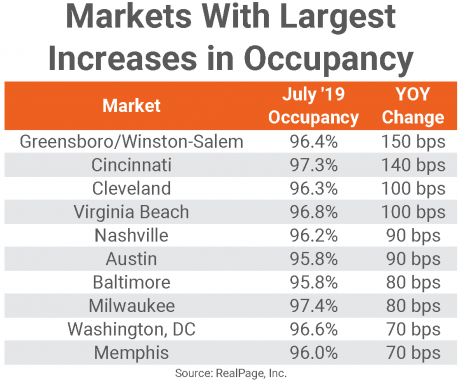 Rental occupancy rates in the Northeast hit 97% last month, followed by the Western region at 96.5% and the Midwest at 96.4%. In all, each region saw their occupancy rates rise by 0.2 to 0.5 points from a year ago.

"Millennials are a large reason why the current rental market is thriving," said Ten-X Chief Economist Peter Muoio. "Though we expect homeownership in this important age group to increase over the long term, so far they remain focused on renting.

"At the same time, there continues to be new rental properties hitting the market," Muoio added. "However, construction is expected to scale down next year, causing vacancies to rise to a predicted 5.7% before quickly being absorbed due to the continuing increase of household formations."

With nearly $1.5 trillion in student loan debt, members of this generation are holding off on buying a home and are opting to rent instead.

"It is unsurprising that the multifamily sector is continuing to thrive through the first half of 2019," Muoio continued. "With the economy continuing to grow and the labor market very healthy, the ingredients remain in place for steady household formations and apartment demand. We continue to expect that Millennials will migrate out of their family homes to rent apartments and eventually single family homes of their own."