The nation’s median rent prices moderately rose in August, climbing the highest in the Golden State, according to Zumper’s latest National Rent Report.

According to the company’s data, the rental price for a one-bedroom and two-bedroom unit inched forward 1.1% and 0.5% this month.

This means it now cost the average renter a median of $1,223 and $1,477 to rent the average one-bedroom and two-bedroom units, equating to an annual increase of 2.1% and 2.2%, respectively.

This month, Zumper notes that although San Francisco secured the largest monthly growth rate for one-bedroom units, it was really New York that experienced the most significant increase.

According to the company’s data, the average rent for a one-bedroom unit in New York shot up to $3,050, pushing rent to a new 3-year high.

“While San Francisco renters can breathe some relief as one-bedroom rent dropped back down to $3,600, New York City renters are on the opposite boat as one-bedroom rent reached a new 3-year high of $3,050,” Zumper writes. “Some key factors of this spike in New York City prices seem to be due to potential buyers choosing to rent instead of own while the sales market softens, which creates more competition in the rental space.”

“For the rest of the top markets, Oakland moved back into the top 5, so 3 of the 5 most expensive cities resided in northern California,” Zumper writes. “Honolulu has gotten further and further away from the top 10, dropping another spot to 14th in this report. In terms of monthly growth rates, 3 of the top 5 largest were located in the top 25 markets while the rest of the nation had a more stable month.”

The chart below displays the 25 most expensive rent markets and how they moved in August, according to Zumper: 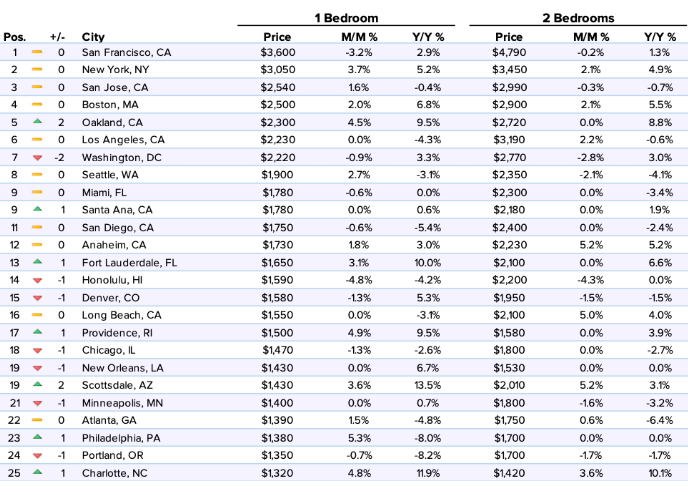