The average credit score of borrowers who got all types of mortgages in June rose to 731, an almost three-year high, as a strong labor market helped Americans pay their bills on time.

Higher FICO scores weren’t the result of lenders tightening standards. The Mortgage Credit Availability Index that measures how easy it is to get a loan was at a record high in June, according to the Mortgage Bankers Association. (See chart below.) The MBA's data series goes back to mid-2011, but it has biannual extrapolated data, or historical estimates, that put the MCAI at the highest since the second half of 2007.

The unemployment rate was 3.7% in June, rising from 3.6% in May that was the lowest level in almost 50 years, according to the Bureau of Labor Statistics.

Debt-to-income ratios, known as DTIs, for mortgage borrowers in June matched the prior three months that were the best since mid-2017. Ratios tend to improve as mortgage rates go down, because cheaper financing translates into lower monthly mortgage payments. The average rate for a 30-year fixed mortgage was 3.75% this week, near a three-year low, Freddie Mac said on Thursday.

The average “front end” ratio measuring a borrower's income compared to the new monthly mortgage payment was 25%, meaning a quarter of borrowers’ income was going to toward paying their home loans. The average “back end” ratio, measuring all recurring monthly debt including mortgage bills, stood at 38%. 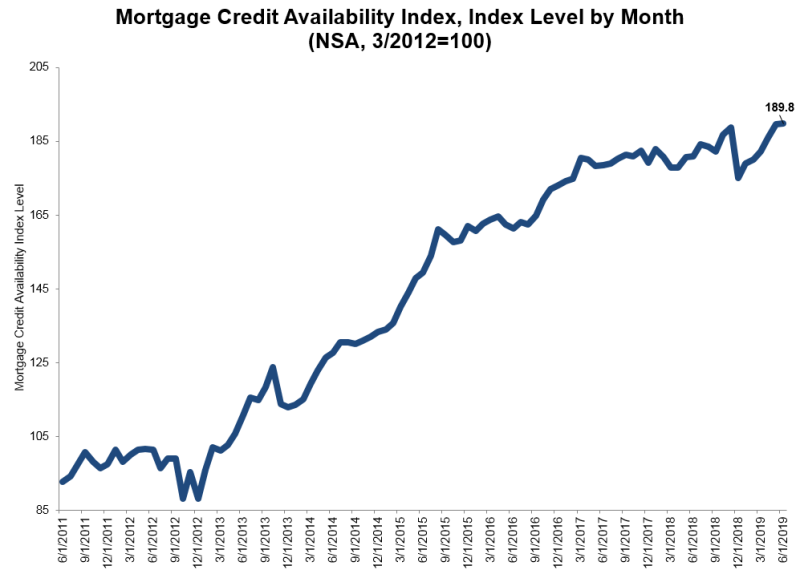