In June, the nation’s median home price rose for the third consecutive month, increasing 3.4% from a year earlier, according to new data from Redfin.

Redfin’s data also determined that only 6 of the 85 largest metros saw a year-over-year decline in their median sale price. Of these markets, San Jose experienced the most significant decline with home prices falling 4.9% from 2018 levels.

“In places like Philadelphia and Cleveland, where home prices are growing by double digits and buyers are rate- and price-sensitive, falling mortgage interest rates make buying a home this summer increasingly attractive,” Fairweather said. “But without a commensurate increase in the number of homes for sale, some of the most affordable markets are driving nationwide home prices up. Meanwhile, expensive markets like the Bay Area and Seattle are still feeling a chill with falling prices and many more homes for sale than there were a year ago.”

“Unlike their inland counterparts, buyers in these once-hot West Coast markets are less likely to feel the urgency to buy while rates are low and before prices rise more,” Fairweather said. “As long as mortgage rates and inventory are low, we’ll see more buyers competing for homes and driving up prices in places where they are still relatively affordable. And without more homes to buy, particularly at affordable price points, sales will continue to lag.”

When it comes to home sales, the report revealed they fell 8% in June, reversing course from May’s 2.2% increase.  All in all, Redfin indicates that home sales declined annually in 80 of the 85 markets it tracks.

“With prices growing, flat inventory, and homes selling as fast as ever, we were surprised to see that the number of sales fell as much as it did in June,” Redfin writes. “The 8% drop was the fourth largest decline in eight years. When our economists investigated, they found that after adjusting for the number of weekdays in a month, the sales were down just 3.5% year over year.” 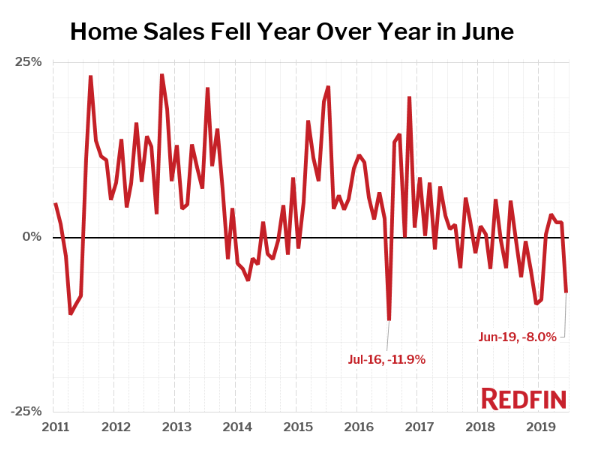 Appraisal Institute president Jody Bishop spoke to HousingWire about what he would like to change about the profession, while still advocating for its members.