As rent prices continued to climb in June, RentCafé indicates that the nation’s mid-year average rent spiked $37 from the previous year.

According to the company’s Mid-Year Rent Report, the national average rent in June totaled $1,465. Not only is this a 0.8% increase from the previous month, but it is also 2.6% higher than the same period in 2018.

RentCafé’s data shows that 88% of the cities analyzed in its report experienced a rent increase in the first half of the year. In June alone, 35% of the country’s largest 260 cities had rents that exceeded the national average, whereas only 5% of rents fell below this median.

Once again, expensive coastal cities maintained the reputation of hosting the nation’s least affordable rental markets. To no surprise, Manhattan lead the charge as America’s most expensive rental market with rent reaching a high of $4,190, according to RentCafé.

“The most expensive renter hubs in the United States are still popular cities with strong local economies,” RentCafé writes.  “Manhattan keeps the title of most expensive in the U.S. with rents in the $4,000s while renting in Los Angeles, Washington, DC, and Seattle, WA range between the $2,000s and $2,500s.”

And although rental prices are ticking up in the majority of the nation’s rental markets, RentCafé indicates that rent in Wichita, Kansas continues to be the most affordable in the country at $656 per month. This is followed by Tulsa, Oklahoma where rent sits at a low of $696 and Toledo, Ohio with $721.

The image below shows monthly rent changes across the country: 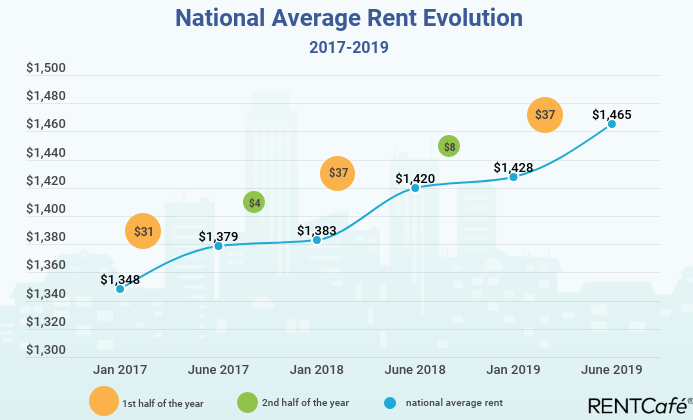