Mortgage interest rates fell throughout the first quarter, eventually experiencing the largest single-week decline in 10 years. That decline led some to suggest that a boom in refinances could be on the horizon.

And while that may yet happen, it hasn’t happened yet.

In fact, the mortgage business just experienced its worst quarter in more than four years.

According to the latest report from the Federal Reserve Bank of New York’s Center for Microeconomic Data, there were only $344 billion in mortgage originations in the first quarter, down from $401 billion in the previous quarter.

That’s the lowest dollar amount of mortgage originations in any quarter since the third quarter of 2014.

Mortgage originations, which the Fed measures as appearances of new mortgage balances on consumer credit reports and includes refinanced mortgages, came in at $445 billion in the third quarter of last year.

Then, originations fell to $401 billion in the fourth quarter. And now, they’ve fallen again to levels not seen since midway through 2014.

The report also showed that mortgage delinquencies improved slightly in the first quarter, with 1% of mortgage balances at 90 or more days delinquent, down from 1.1% in the fourth quarter.

Mortgage performance also improved, with approximately 0.9% of current balances transitioning to delinquency during the first quarter.

Overall, mortgage debt increased in the first quarter by $120 billion to $9.2 trillion.

Balances on home equity lines of credit fell slightly, by $6 billion, continuing a trend that stretches back to 2009. HELOC balances now stand at $406 billion.

Total consumer debt also continued to rise. According to the Fed report, total household debt increased by $124 billion (0.9%) to $13.67 trillion in the first quarter of 2019.

That’s the 19th consecutive quarter with an increase, meaning the debt load consumers are facing has increased every quarter for almost five years running.

The total of consumer debt is now $993 billion higher than the previous peak of $12.68 trillion in the third quarter of 2008. 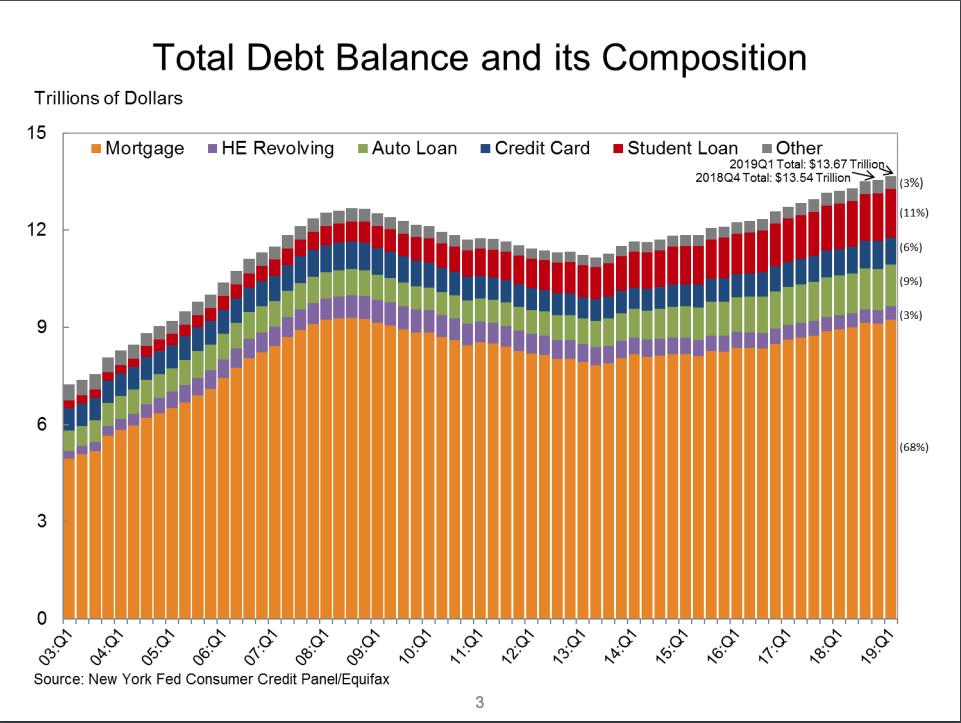 (Click to enlarge. Chart courtesy of the Federal Reserve)