When Zillow acquired Mortgage Lenders of America last summer, it led to a lot of industry speculation as to what its future aspirations were related to the financing side of real estate transactions.

The need to hypothesize is no longer necessary. As laid out in its annual 10-K filing with the U.S. Securities and Exchange Commission, significant expansion of mortgage originations is a critical component to Zillow’s strategy to transform their organization.

Zillow announced a change at the top of their org chart back in February – co-founder and former CEO Rich Barton would be taking back over as CEO, replacing fellow co-founder Spencer Rascoff. Barton founded Expedia in 1994, co-founded Glassdoor in 2007 and has served as Zillow’s executive chairman since stepping down as CEO in 2010 to let Rascoff take the helm.

Barton will lead the planning and execution of a fairly substantial metamorphosis of the company. Currently, the vast majority (96% in 2018) of Zillow’s revenue comes from the sale of advertising products and services for real estate, rental and mortgage professionals. But their recent 10-K filing makes it 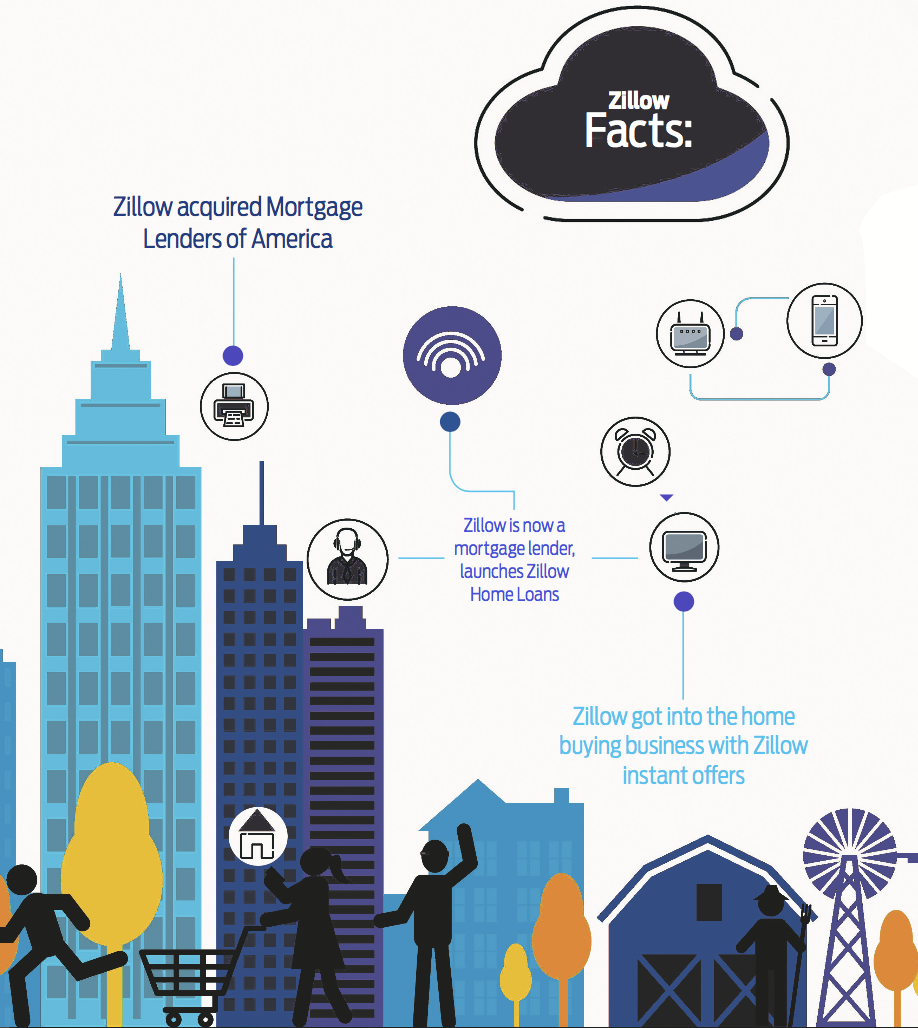 Moving further down the funnel

This quote from the 10-K filing says it best:

“On October 31, 2018, we completed the acquisition of MLOA, a licensed mortgage lender,” the filing stated. “This acquisition is consistent with our strategy of moving further down funnel and closer to the real estate transaction to create better consumer experiences. The total purchase price for the acquisition of MLOA was approximately $66.7 million in cash.”

In the event that doesn’t make it clear, the word “mortgage” appears 340 times in the filing. Zillow plans to grow mortgage revenue by roughly 30% to 40% in 2019 versus 2018, when they generated just $80 million in that bucket. More broadly, Zillow’s stated three to five-year plan is to grow annualized revenue of their “homes segment” to $20 billion (yes, billion with a “b”) through the purchase of 5,000 homes a month through Zillow Offers and to originate 3,000 mortgage loans per month.

These 3,000 loans per month at the average national new mortgage loan amount of $260,000 would total $9.4 billion in annual mortgage originations, making Zillow Home Loans one of the largest retail mortgage originators in America.

What Zillow is clearly doing is positioning themselves for the evolving state of real estate transactions and financing. It’s a fine line they’re walking, as their strategy of controlling more of the point of sale of both real estate transactions and real estate financing flies in the face of the profitable Premier Agent, Mortgage Marketplace and Zillow Rentals services that produces the vast majority of their current revenue. Even before Zillow Offers and Zillow Home Loans, an inherent tension existed between Zillow and many of the real estate agents and mortgage loan originators that provide that revenue. But as they say in hockey, Zillow is skating to where the puck is going, not where it’s at currently.

Zillow goes out of their way to lay out the risks of this inherent challenge in the recent 10-K filing in the “Risks Related to Our Business and Industry” portion of the report. Within that section, they lay out their current reliance on advertising income and the pressures to that model from competitors, emerging technology, and its reliance on maintaining relationships with real estate brokerages, real estate listing aggregators and multiple listing services.

There’s also a section of that risks segment titled “Our Entry into the Mortgage Lending Business Could Fail to Achieve Expected Results and Cause Harm to Our Financial Results, Operations, and Reputation.” After cycling through the regulatory and general “constantly change” aspect to the mortgage industry, they end that section with this statement:

“Our recent entry into the mortgage lending business may also cause a negative reaction within the mortgage industry, including among some of our mortgage advertisers, which could harm our reputation, results of operations and financial condition.”

It’s already started. The real estate agent community is already in general disbelief over Zillow’s access to the MLS and the threat it poses to the traditional Realtor model. This threat has been challenged in court and sets up an eventual showdown of some sort between the National Association of Realtors and Zillow.

NAFCU’s underlying point was a valid one – mortgages originated by Zillow and other fintech lenders should be regulated just as intensely (if not more intensely) than credit unions given their connection to other aspects of the real estate transaction, the amount of customer data they preside over, and the fact that they’re not subject to the same cybersecurity examinations depositories are under as part of the Gramm-Leach-Bliley Act.

The Netflix of mortgage

If this all sounds like a shift to move Zillow from an advertising service to an all-inclusive online platform for all components of the real estate transaction process, that’s because it is. Barton foresees Zillow as “the winner in online real estate 2.0,” clearly aiming to fully disrupt the housing industry just as Amazon and Netflix have done in their spaces.

Barton has been on the Netflix board of directors since 2002.

Consider this nugget from a recent interview Barton did with GeekWire: 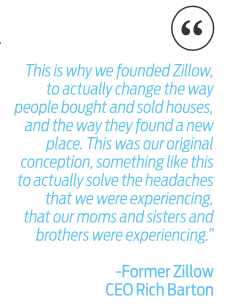 “This is why we founded Zillow, to actually change the way people bought and sold houses, and the way they found a new place. This was our original conception, something like this to actually solve the headaches that we were experiencing, that our moms and sisters and brothers were experiencing.”

Zillow has 195 million monthly unique visitors to their website, and 80% of all US homes have been viewed on Zillow. Every single day, home buyers get younger and more comfortable with online transactions, even on purchases as significant as a home.

Zillow has the clear potential and obvious desire to evolve into one of the largest mortgage lenders in America, with upside on par with what Amazon and Netflix have achieved.

Zillow Offers – grand plans, and how they want it to feed their mortgage business

Consider this from Rascoff from their 2018 second quarter earnings call transcript, which came just after their acquisition of Mortgage Lenders of America:

Clearly, Zillow will want to control the mortgage loan process and fee income on homes they sell through Zillow Offers, a program they are rapidly expanding.

Zillow’s massive online following will also see Zillow Offers homes featured more prominently on their platform. Recently, a Zillow spokesperson said that the company is running “tests” on Zillow.com and its various mobile apps that show its own for-sale homes at the top of its home search pages, ahead of other competing listings.

Zillow recently announced purported enhancements to the accuracy of Zestimates

A little over a year and a half ago, Zillow launched a contest to see if anyone could create an algorithm that could beat the one they were currently using to form “Zestimates,” the online real estate giant’s property value estimation tool. If anyone was successful, they’d give them $1 million. 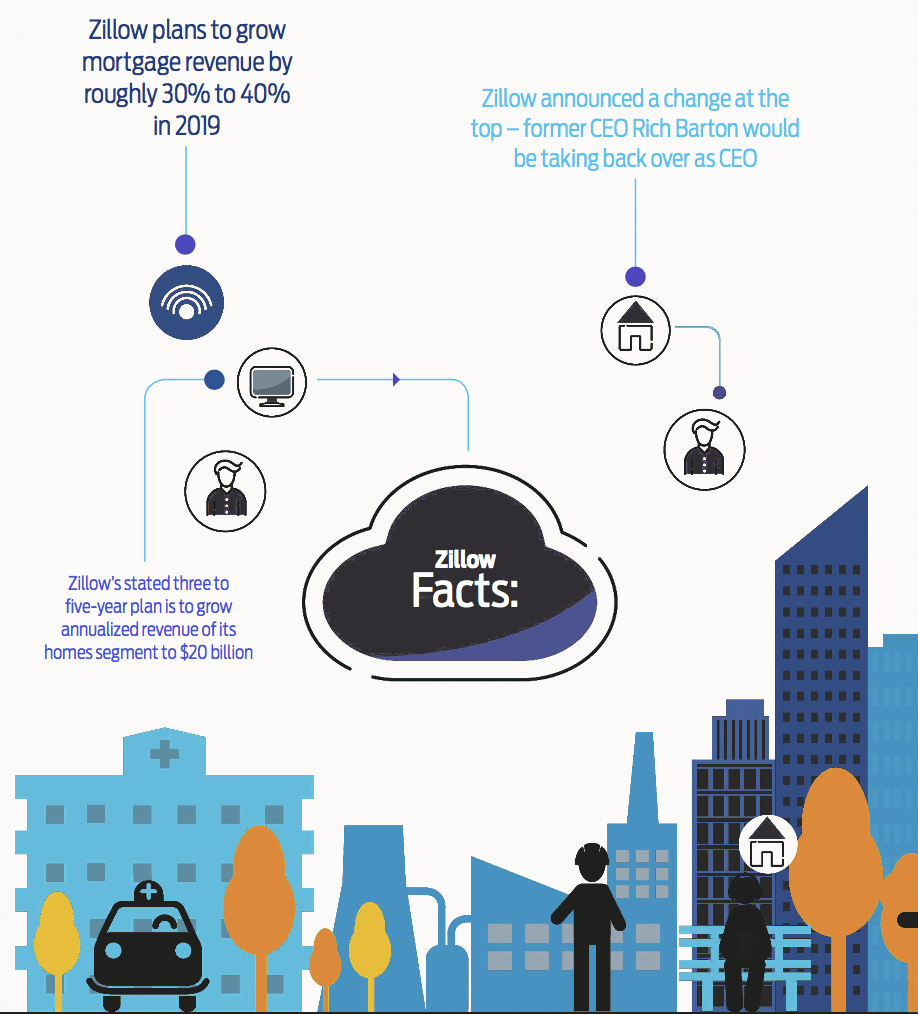 On January 30, Zillow announced that a team of people had succeeded in creating a model that they said bested the Zestimate. The winning team included data scientists and engineers from around the world: Chahhou Mohamed of Morocco, Jordan Meyer of the United States, and

Zestimates are a primary driver of Zillow web traffic, which leads to familiarity with the site, which leads to home searches, which will eventually lead to more Zillow Offers purchases and sales and more Zillow Home Loans business. If only for the publicity alone, this was a smart $1 million investment.

If you spend some time scrolling through the archives of the “Research” page of Zillow’s website, you’ll see an interesting transformation starting to take place. Prior to 2019, Zillow Research was primarily limited to reporting of housing industry related indicators like new and existing home sale data, home appreciation indices and tracking of the direction of mortgage rates and rents.

Then starting in January, in a clear departure from their “simply report the housing numbers” media strategy, Zillow began posting a series of op-ed columns on affordability, age/race, the environment and other social and thought leadership issues that impact the housing industry.

The 800-pound gorilla is in the room

Zillow’s connection to the point of sale of real estate transactions is staggering. Their leadership has a strong track record of growth and innovation at Zillow and in other ventures. Home buyers continue to get increasingly more comfortable with online transactions each day. As the mortgage industry continues to slowly muddle through a complete digital transformation, Zillow now has the framework in place to continue to accelerate their home buying, selling, and financing arms. And they now have aggressive stated growth goals for those platforms.

What they’re trying to pull off is risky, for all the reasons noted. Their growth plans largely conflict with their current revenue sources. The mortgage industry is heavily regulated and experiences constant change. With great risk comes great reward. With their online following, Zillow has the opportunity to become one of the largest mortgage lenders in America, just a few years after entering the space.