Home price growth continues to slacken, with annual growth decelerating to the slowest pace since August 2012.

According to recent data from CoreLogic, home prices in January grew 4.4% year over year, increasing just 0.1% from the previous month.

Since peaking at 6.6% growth in April 2018, home prices have continued to slow, which CoreLogic attributes to rising interest rates. 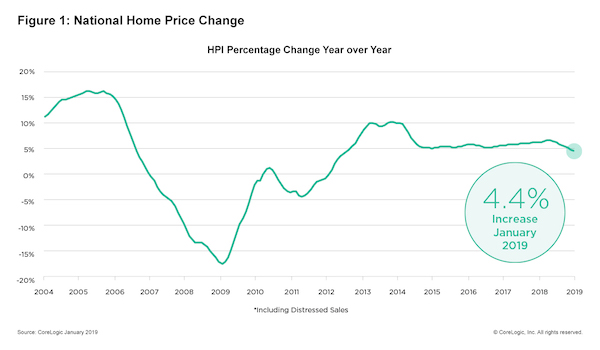 But Nothaft said he expects things to pick up with the spring thaw now that rates have come down.

“Fixed-rate mortgage rates have dropped 0.6 percentage points since November 2018 and today are lower than they were a year ago,” Nothaft said. “With interest rates at this level, we expect a solid home-buying season this spring.”

It also projects appreciation to decrease from January to February by 0.9%.

But CoreLogic President and CEO Frank Martell said that he expects things to pick up later in 2019.

“The slowing growth in home prices was inevitable in many respects as buyers pull back in the face of higher borrowing and ownership costs,” said Martell. “As we head into 2019, we can expect continued strong employment growth and rising incomes, which could support a reacceleration in home-price appreciation later this year.”

Compass’s S-1 reveals some creative accounting when it comes to revenue. Here’s our breakdown of Compass’ path to profitability. HW+ Premium Content