Although several housing markets were impacted by January’s slow growth in home sales, new data from Redfin indicates the West Coast is especially feeling the slowdown.

According to the company, homes in San Jose’s metro took an average of 45 days to sell for the four-week period ending Jan. 27, an increase of 12 days from the same time period in 2018.

In Seattle, homes spent 47 days on the market, up from 15 days in the same period last year. Homes in Portland took 50 days to sell, increasing from 28 days one year prior.

“Buyers this year don’t have the same sense of urgency that was palpable a year ago,” Redfin Agent Daniel Brooks said. “Buyers are not worried about losing out on homes and more than willing to wait for a seller to drop her price. With front-row seats to a rapidly changing market, 2019’s buyer is savvy and is adapting quickly to the new normal."

In fact, the latest data from Realtor.com revealed that 15% of U.S. listings experienced a price cut in January, which amounts to a 2% year-over-year increase.

“Although the market is slowing, it’s important to remember that we’re coming off of four straight years of inventory declines that pushed the market to a record low availability of homes for sale,” Realtor.com Chief Economist Danielle Hale said.

Nevertheless, Redfin notes the slowing trend is not as dramatic nationwide. According to their data, early 2019 marked the first year that the housing market experienced a year-over-year increase in days on market in three years.

“The slowing pace of the market comes as good news for buyers who may have felt rushed in the overheated market last spring,” Redfin writes. “As competition for homes eases, buyers now have more time to carefully consider what for many will be the largest purchase of their life.”

The image below highlights how long homes are staying on the market in the West Coast: 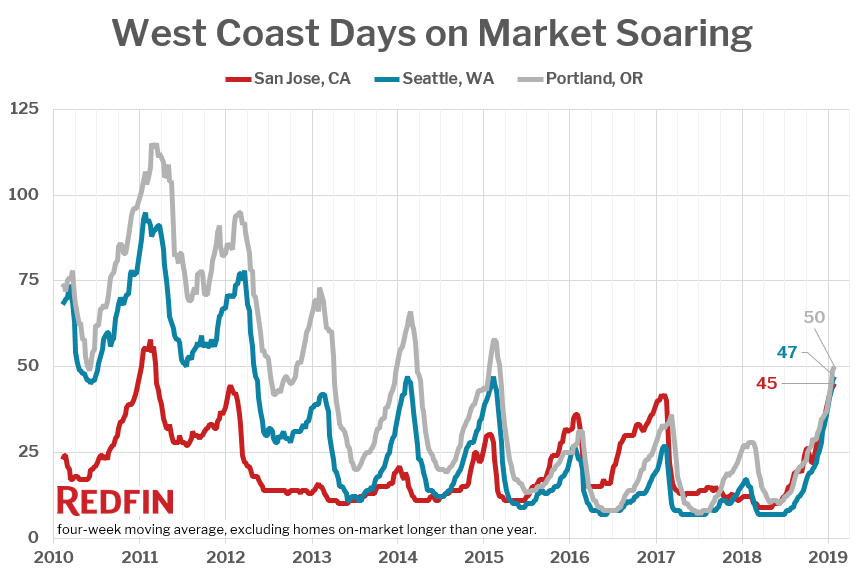