Like last year, the U.S. Department of Housing and Urban Development reported yet another annual increase in homelessness.

“Our state and local partners are increasingly focused on finding lasting solutions to homelessness even as they struggle against the headwinds of rising rents,” HUD Secretary Ben Carson said. “Much progress is being made and much work remains to be done but I have great hope that communities all across our nation are intent on preventing and ending homelessness.” 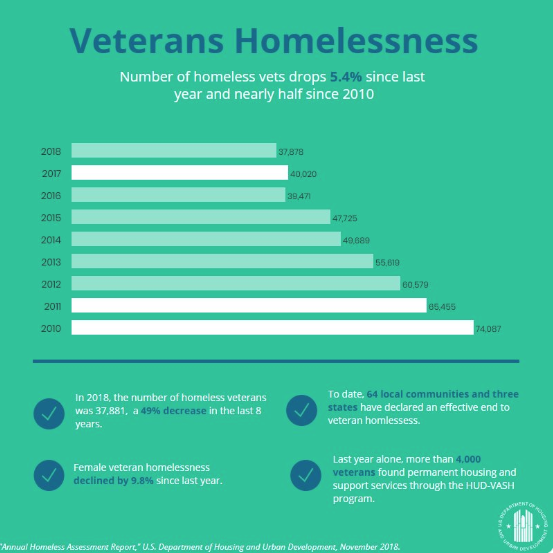 Back in 2017, former HUD Secretary Julián Castro said in an exclusive interview with HousingWire that President Donald Trump’s budget lacked vision and that it would create more homeless veterans.

As the chart above shows, homeless veterans did increase in 2017. However, they decreased again in 2018. And Trump’s 2019 budget proposal would boost HUD’s funding by 1% from the previous cuts he made to the department. When Trump first took office, he cut HUD’s budget by 13.2%.

HUD also pointed out that Hurricanes Harvey, Irma, Maria and Nate, along with western wildfires and other storms and events, caused an increase of 4,000 people living in emergency shelters.

While 31 states and the District of Columbia reported a decrease in homelessness in 2018, 19 states offset this and reported increases.

“Communities across the country are getting better and better at making sure that people exit homelessness quickly through Housing First approaches,” said Matthew Doherty, U.S. Interagency Council on Homelessness executive director. “We know, however, that a lack of housing that people can afford is the fundamental obstacle to making further progress in many communities.”

The chart below shows the estimate of people experiencing homelessness from 2007 to 2018. 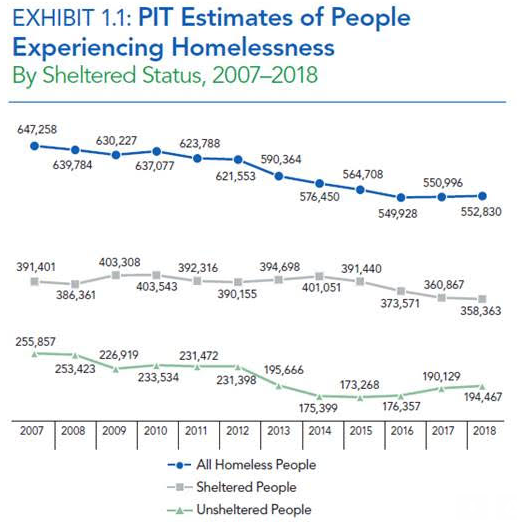 While most of the homeless population lives in shelters, the chart shows 194,467 were unsheltered.