Mortgage rates and home prices have climbed to historic highs in 2018, prompting many homebuyers to seek out more affordable markets.

So, where exactly are they heading? LendingTree’s latest migration analysis revealed that 12.1% of American homebuyers who relocate to different states prefer to call the south their new home.

The report indicated that across the country, Florida is the No. 1 destination for homebuyers moving from 15 of the 50 states. Notably, of all purchase mortgage requests, 9.1% were made for Florida, and 12.4% of out-of-state movers requested the state as well.

However, when LendingTree analyzed destination states according to population size, South Carolina scored the highest. In this state, mortgage loan requests were 52% greater than suggested based on its share of the national population.

When it came to homebuyers relocating within their state, Texas led the way with 93.4% of purchase mortgage requests from individuals looking for properties.

Unfortunately, Alaska wasn’t as lucky, as LendingTree revealed only 75.2% of Alaskan homebuyers wanted to relocate within the state, marking the lowest percentage across the country.

The image below shows the top states for relocation: 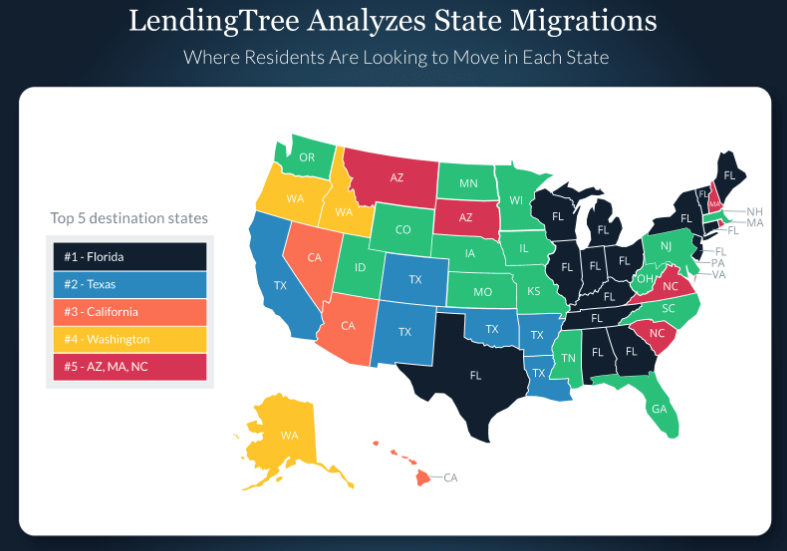 Overall, LendingTree's research reveals that the majority of people looking to move out of state don’t want to move that far. In fact, more than half of the most popular destinations actually border the current states of homebuyers.

That being said, if they have plans of moving across country, it’s more than likely they're heading to the south.

“Rising mortgage rates are exacerbating affordability issues that have been driving people out of expensive coastal metros for the past few years,” Redfin Chief Economist Daryl Fairweather said. “With rates no longer near historic lows, buyers are increasingly cost-conscious, seeking more affordable homes in low-tax states in the South and middle of the country.”

You can read more about Redfin's report here.