Since last year, several cities across the country have battled it out to see who will host Amazon’s second headquarters. But when news broke last week that the tech giant had narrowed its list down to cities in Virginia, Washington, Texas and New York, speculation created a frenzy of excitement.

On Tuesday, Amazon finally announced it selected Long Island City, New York, and Crystal City – in Arlington County, Virginia – as the split locations for its HQ2, and data suggests that the real estate markets in these areas saw a surge of interest when speculation of their selection first arose last week.

According to data from Redfin, agents in both regions have experienced a flood of requests from prospective homebuyers looking to invest in some prime real estate.

This is likely attributed to the substantial amount of opportunity Amazon brings to local markets, such as a boost in employment, housing and new tech talent.

Redfin data indicates that the online views for homes on the market in Long Island City have spiked, climbing 794% year over year in just 11 days.

Crystal City is also experiencing its own wave of homebuyer interest, as online inquires have risen 210% from the previous year. 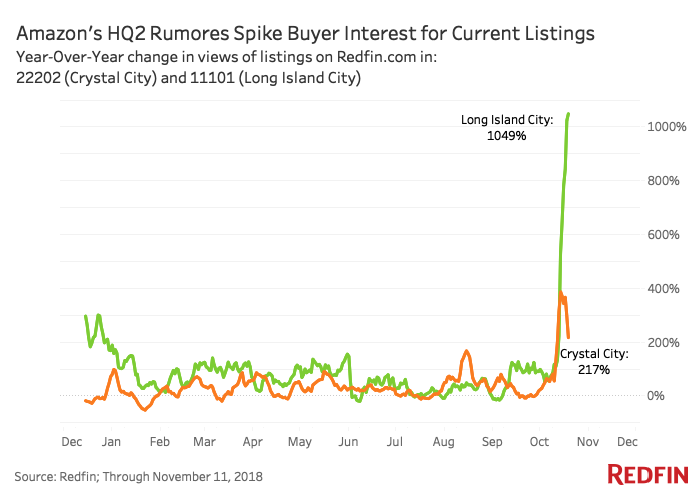 Redfin Agent Mara Gemond likened the situation to a horse race, as buyers are lining up and waiting for the gates to open.

“I believe there is a lot of interest from investors who want a property they can rent out to a future Amazon employee, or possibly use for corporate housing, Gemond said. “Investors are betting that prices will rise quickly, and they’ll be able to rent or sell for a nice profit once Amazon comes to town.”

Will Nashville see a similar boost in its housing market? Only time will tell, but if Long Island City and Crystal City are indicators of optimism, then all signs point to yes.