The average margin rate is up slightly from 1.99% in August, indicating that it is remaining relatively stable now that the industry has adapted to reverse mortgage program changes that went into effect in October 2017.

Following the changes, the industry saw margins fluctuate as lenders struggled with how to remain competitive and make up for a decline in profitability. In January, margins were averaging 2.54%, according to Baseline data.

Now, it seems things have normalized with margins settling in the 2% range.

Baseline President Dan Ribler said the average margin range has remained pretty tight since May, moving between 1.99% and 2.06%. 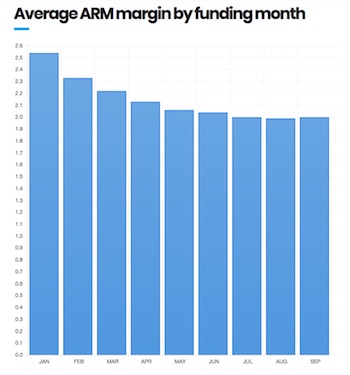 “We have observed occasional loans with margins as high as 4% and as low as .05%, but these are outliers that look more like originators getting creative to solve individual borrower problems, rather than normal course of business,” Ribler said.

Ribler said Baseline’s HECM Index shows that pricing on new originations has declined slightly into a rate curve that is mostly rising.

“There’s nothing of special note here – just normal market gyrations,” Ribler said. “But originators need to pay particular attention to pricing for loans that have not been locked.”