With more and more renters feeling the affordability crunch, there seemed to be some light on the horizon recently with the steady rise in rents appearing to finally slow down over the last few months.

As it turns out, rents are still going up and just hit an all-time high, again.

Earlier this week, the U.S. Census Bureau reported that during the third quarter, the nationwide median asking rent topped $1,000 for the first time ever.

The increase has been dramatic over the last few years. Just three years ago, the asking rent was a full $200 less per month than it is right now. 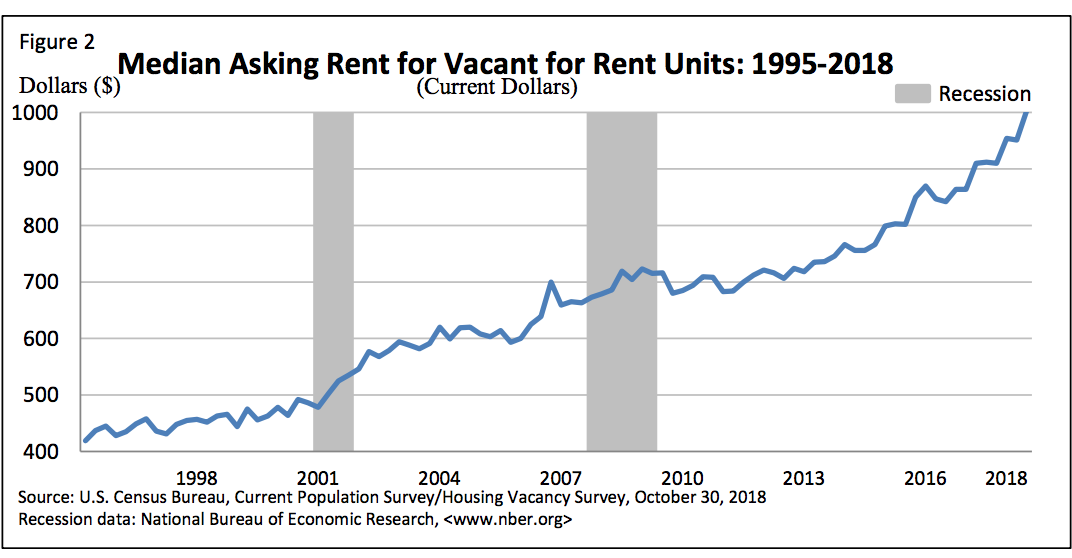 (Click to enlarge. Image courtesy of the Census Bureau)

As one might expect, the largest increase came in in the Northeast, where rents are among the highest in the nation. In the Northeast, the median asking rent rose from $1,134 in the second quarter to $1,210 in the third quarter. Interestingly, the third quarter total is actually less than it was during the first quarter, when the asking rent was $1,279.

The largest year-to-date increase is actually in the South, where rents have climbed from $907 in the first quarter to $973 in the third quarter, an increase of $66.

On the other hand, rents in the Midwest have fallen from $764 in the first quarter to $751 in the third quarter.

So, despite falling in the Midwest and the Northeast, rents went up in the South and West, and all that added up to a $49 increase in rents this year.

The rise in asking prices isn’t confined to rental units either. The median asking sales price for homes is going up as well.

According to the Census data, the nationwide median asking sales price for a home rose to $206,400 during the third quarter, which marks the first time that figure has crossed $200,000.

So there’s not much of a respite from the affordability issue in either renting or owning, and that’s bad news for renters, buyers, and everyone else (unless you’re a landlord or a seller, of course).