For the first time in a year, annual gains have now fallen below 6%, according to the latest Case-Shiller Home Price Index from S&P Dow Jones Indices and CoreLogic.

The report's results showed that August 2018 saw an increase of 5.8% for the year for home prices nationwide, but this is down from 6% from the previous month's report.

The graph below highlights that average home prices within the 10-City and 20-City Composites are now back to winter 2007 levels. 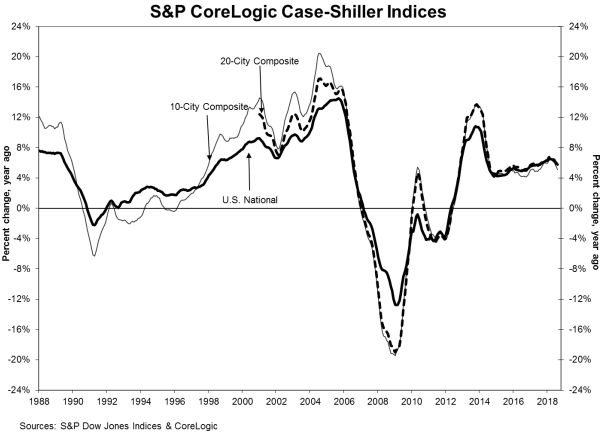 S&P Dow Jones Indices Managing Director and Chairman of the Index Committee David Blitzer said following reports that home sales are flat to down, price gains are beginning to moderate.

“Comparing prices to their levels a year earlier, 14 of the 20 cities, the National Index plus the 10-city and 20-city Composite Indices all show slower price growth, Blitzer said. “The seasonally adjusted monthly data show that 10 cities experienced declining prices.”

“Other housing data tell a similar story: prices and sales of new single-family homes are weakening; housing starts are mixed and residential fixed investment is down in the last three quarters,” Blitzer continued. “Rising prices may be pricing some potential home buyers out of the market, especially when combined with mortgage rates approaching 5% for 30-year fixed rate loans.”

Blitzer added there are no signs that the current weakness will become a repeat of the crisis, however.

“In 2006, when home prices peaked and then tumbled, mortgage default rates bottomed out and started a three-year surge,” Blitzer said. “Today, the mortgage default rates reported by the S&P/Experian Consumer Credit Default Indices are stable. Without a collapse in housing finance like the one seen 12 years ago, a crash in home prices is unlikely.”

Nearly three months after data giant CoreLogic confirmed it was exploring multiple offers of acquisition the company is down to final two bidders.