Nearly 50% of U.S. renters are cost burdened and spend 30% or more of their income on housing.

According to Apartment List research, cost burden has been inching down for the last six years, but improvement has been incremental. In 2016, the percentage of cost-burdened renters was 49.7%. In 2017, that number fell just two tenths of percent to 49.5%, the lowest since 2007.

Adding a little salt to the wound, Apartment List's data indicates that most of this improvement came from the addition of high-income renters rather than a decrease in cost-burdened households.

Apartment List, like many other entities studying the affordability crisis, attributes most of the cost burden to a lack of affordable housing in areas of economic opportunity.

In most of the U.S., especially in major job nodes, rents are rising faster than incomes.

The San Franciscos, New Yorks and Denvers of the U.S. couple backbreaking rents with economic opportunity. Despite the cost burden, people flock to booming cities because those places are where jobs are plentiful, and it is better to have a burdensome roof than no roof at all.

The chart below illustrates the relationship between rent growth and income growth as they relate to cost burden. 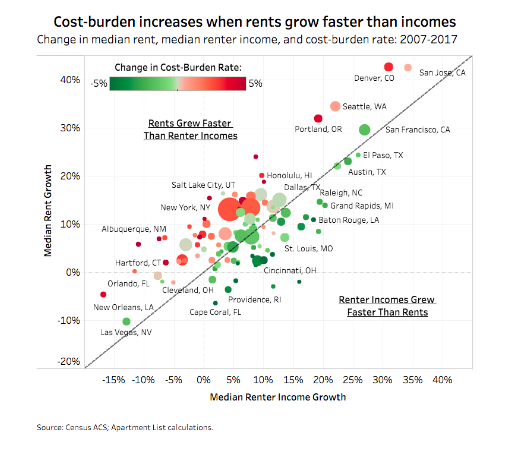 The multifamily industry and the U.S. government are trying to find ways to add to the affordable housing stock in the U.S. So far, the preferred method appears to be dialing up the number of public-private partnerships and tax credits that make it more affordable to build affordable housing, but as Apartment List’s last study showed, not one housing related bill has made through this Congress to date.