Although homeownership rates remain close to half-century lows, a large percentage of Millennials are still determined to actualize the American dream, according to a data blog written by Mark Fleming for First American.

However, Millennials are creating the vast demand for potential homeownership.

The blog points to the results of First American's most recent Real Estate Sentiment Index survey of title agents and real estate professionals that showed nearly 87% of first-time home buyers were in the prime home-buying age of 26 to 35 — the ages of Millennials.

Here is a graph demonstrating the overall change: 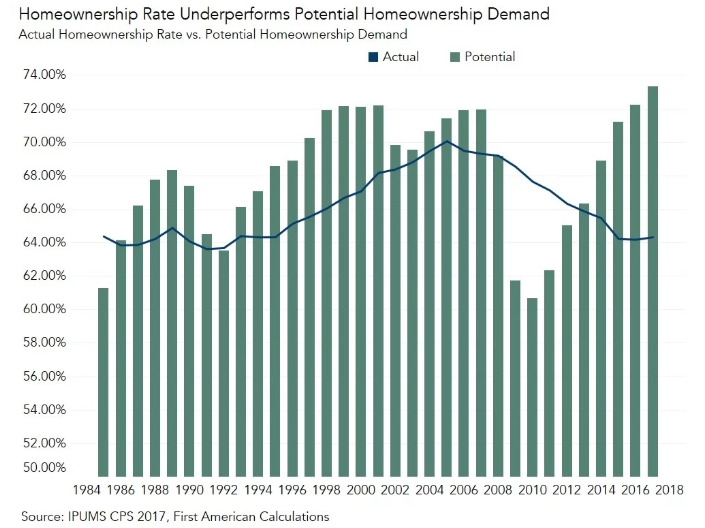 First American attributes underperformance to Millennials, but states that nearly 80% of Millennial respondents to Harvard University’s Joint Center for Housing Studies agreed that homeownership was a part of achieving the American Dream, according to Fleming.

"Millennials are often referred to as a “renter generation,” because they have prioritized furthering their education and thus delayed getting married and having children, which are critical lifestyle triggers to buying a first home," Fleming writes. "However, the dream of homeownership is far from dead for this age group."

However, Millennial lifestyle needs are changing, and many are forsaking family expansion to pursue higher education. That being said, First American’s HPR shows a strong correlation between homeownership and education, as the relation has nearly double in 10 years.

First American also discovered the median age for a first marriage in 2016 was 27.4 for women and 29.5 for men, which was roughly seven years more than the median ages in 1960, according to Fleming.

René Rodriguez, the author of the best-selling book, “Amplify your Influence: Transform how you Communicate and Lead,” is slated to share his expert insights on leadership and influence during the Vanguard Forum at HW Annual this year.