A recession is on the horizon, according to many experts, and could show its face as soon as the end of this decade.

Nearly half of experts recently surveyed by Zillow said they expect the next recession to begin sometime in 2020, according to the company’s Home Price Expectations Survey, a quarterly survey of more than 100 real estate experts and economists.

The last recession came as the result of the housing crisis back in 2008, but now the housing market continues to return to its cyclical highs. But it won’t be housing that brings the U.S. back in to a recession this time. According to the experts interviewed by Zillow, monetary and trade policies will trigger this next recession.

About 48% of those surveyed said the recession would begin in 2020, and 22% said they expect it to begin in the first quarter of that year.

Back in August last year, experts predicted there was a 73% chance of a recession by the end of 2020. 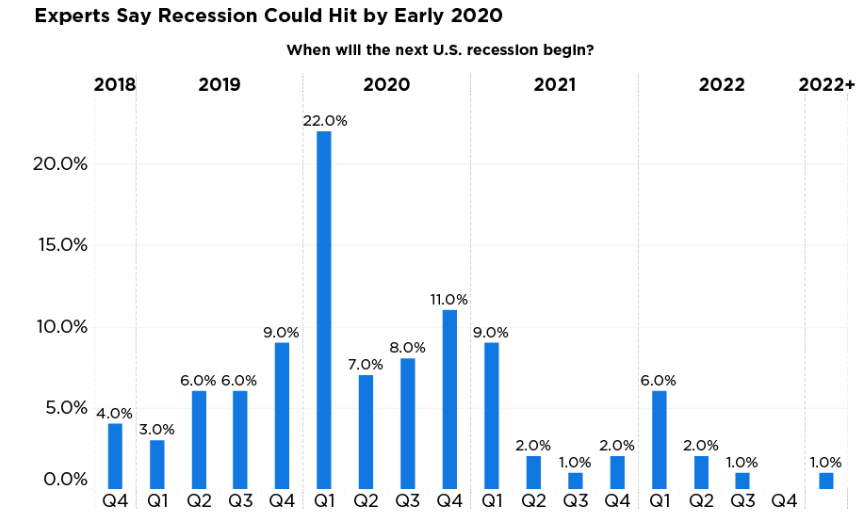 Experts also ranked the most likely triggers for the recession as one, two and three – and with that weighting, monetary policy came out as by far the most expected catalyst, with a score of 137.

This was followed by trade policy with a score of 71, a stock market correction at 69, higher-than expected inflation at 68 and fiscal policy at 64.

A potential geopolitical crisis triggering a recession ranked a distant sixth, with just 26 panelists selecting it as a likely recession spark, for a score of 44 – well below the 67 panelists and score of 138 recorded previously.

But these experts aren’t the only ones predicting the next recession. In fact, in a speech in Paris earlier this week, billionaire George Soros says the world could soon be facing another major financial crisis.

Soros mentioned the dollar surges, capital flight from emerging markets and the recent chaos surrounding Italy and the European Union.